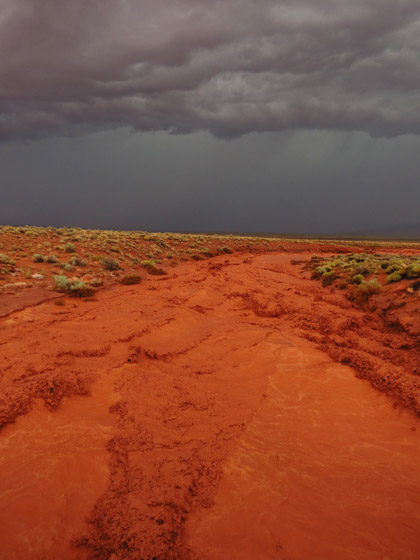 This BLOB brought to you by Funhog Press.

When your fantasy becomes reality, where do you go next? I found myself taking this philosophical detour often in recent weeks; while driving past rich green meadows sprinkled with wildflowers, or watching a sky of misty vapor swirl and curl into layers of varied cloud, and especially as I floated on warm water that just hours before came falling from above. Is this a fantasy for a paddler in Arizona? Yes. It’s also the very real monsoon season of 2013. 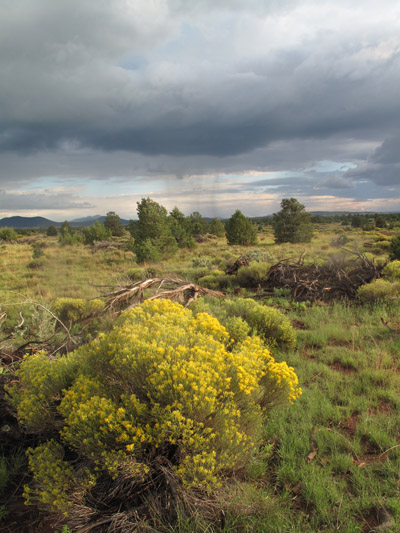 For the record, it was the second wettest monsoon in recorded history here in Flagstaff, with the airport registering 15.51″ of rain, well short of the 20.64″ that fell in 1986, the champion year. Although bureaucratic logic now decrees the “official” monsoon as starting June 15th and ending September 30th, weather observers know that the monsoon is identified by those first beautiful billowing clouds of summer, indicative of tropical moisture that is mercifully drawn over our crackling dry pine forests by easterly and southerly steering winds. It is the season of relief. The 2013 monsoon relieved Flagstaff on June 30th, two days after record heat, and finally retreated to Mexico on September 17th, as morning clouds gave way to a breezy west wind and cloudless skies, instant Autumn. 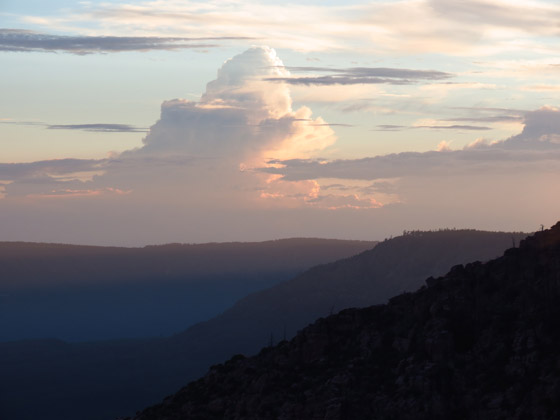 In between, the rains came early and often. On July 2nd, a massive thunderstorm formed over the San Francisco Peaks which dumped 1.76″ of rain and hail on West Flagstaff. This set the tone for the summer. A typical monsoon pattern prevailed through mid-July before deeper tropical moisture inundated the Southwest over the last third of the month. In our Sunnyside neighborhood backyard, the rain gauge tallied 4.5″ over just eight days in late July. Pulliam Airport notched 7.57″ for the month, just .01″ off the 1919 record. Lighter activity was the rule from early to mid-August before the monsoon got pumping again during the latter half of the month. The hardest rain I’ve ever witnessed came around midday on the 25th, when a 15-minute deluge dropped nearly 0.5″ in the gauge. The first week of September provided less action before the dumps returned on the 7th. Over the next three days, it rained in the mornings, poured in the afternoons, and sprinkled through the nights. 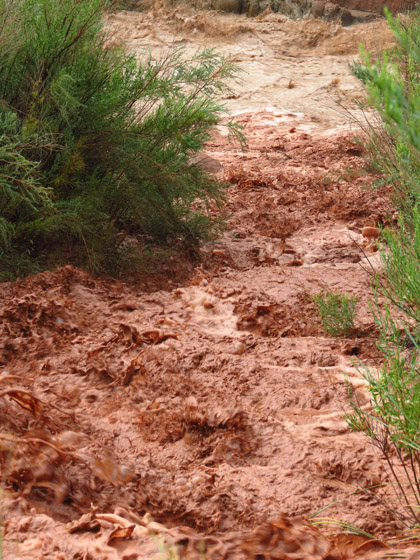 This period ushered in a four-day streak of paddleable water levels on Oak Creek—unprecedented for summer. Teams of paddlers could be found on the creek each day, and following an all night rain, a large Flagstaff posse made a rare run on the Creek’s upper Slide Rock section. After lunch at Garland’s Store, the gang set off for their second run of the day, this time on the standard Indian Gardens reach. Arizona, so often marginal, as Steve Garro says, was very much optimal. 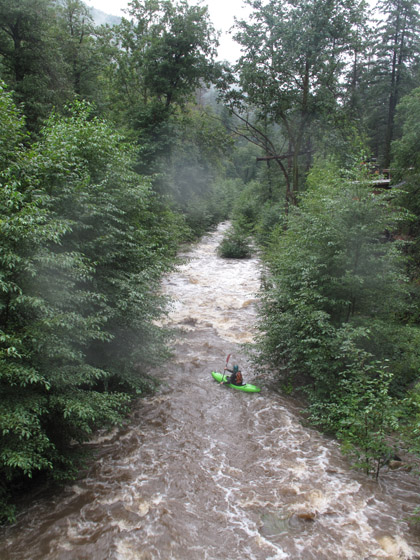 In the next days, four of us headed to the Salt River for a three-day wilderness trip. Warm weather, warm water, not a soul around, and 2,000 cfs, this is prime Salt River paddling. 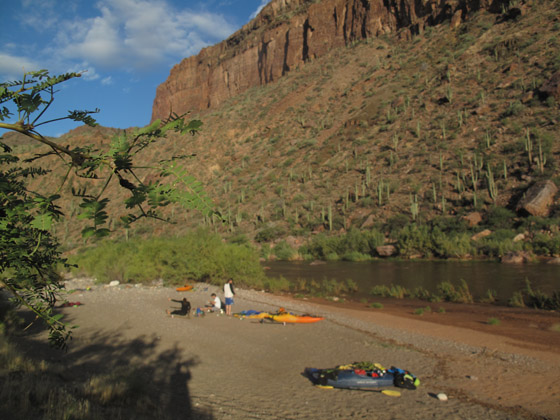 Two weeks previous Lisa and I were on the Verde for an overnighter with our friends Eric, Karin, and Alison. High, warm water running through copses of lush greenery, it was our own little tropical getaway. 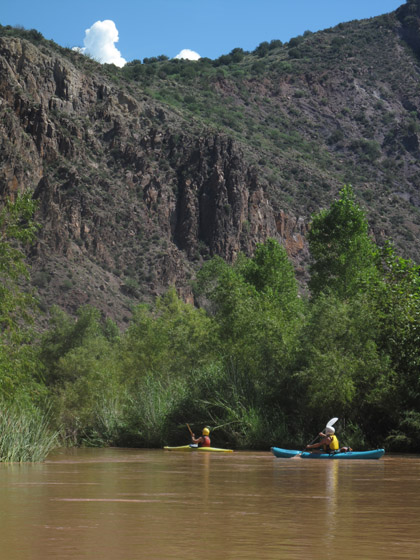 Spotting a cone of intense rainfall south of town one day, I raced home to ring my friend Ted Decker, and inquire about some flash flood scouting, with boats at the ready of course. Having seen the same shower, he was already poised. Water sluiced through the forest, collecting in tiny Woody Wash. At 50 cfs, it was all too comical to really call it whitewater paddling. Nonetheless, we shrugged our shoulders and said “why not?” It was enough to float our boats, and hell yeah we’re claiming it as a first descent! 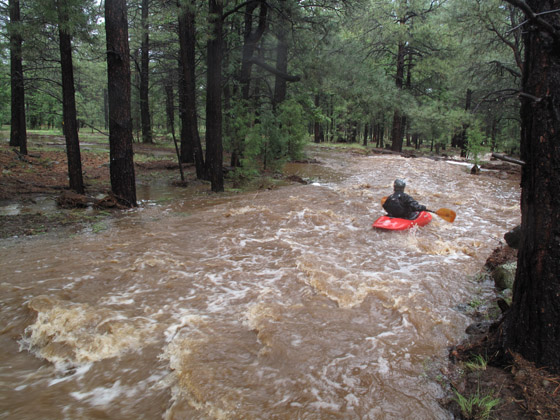 On a more significant undertaking, there was the Agua Fria wait-for-the-water, and then paddle-past-the-water mission which I blobbed about earlier. The Agua Fria, always difficult to catch, displayed runnable windows on two other days during this monsoon, besides the day of our descent. 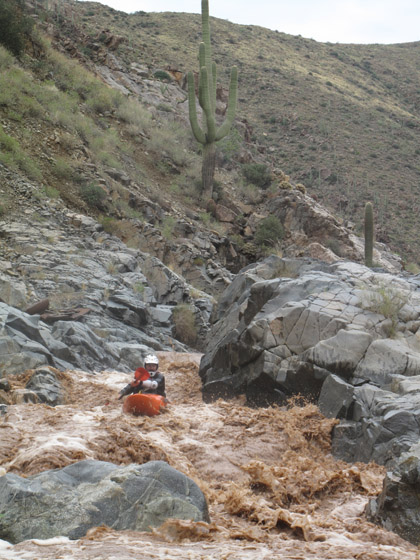 Now, Fall is clearly upon us here in Northern Arizona, with nighttime temperatures nibbling the freezing mark. Still, the Gila River remains high following a large flood (28,000 cfs in the Arizona Box), induced by the same crescent of moisture that crushed the Colorado Front Range. With cooler nights and shorter days, the earth is slow to dry, and water tables are poised for more runoff. Moisture and greenery and water in the rivers, all under the flawless blue skies of Arizona. Is this a fantasy? Perhaps, but it’s also 2013. 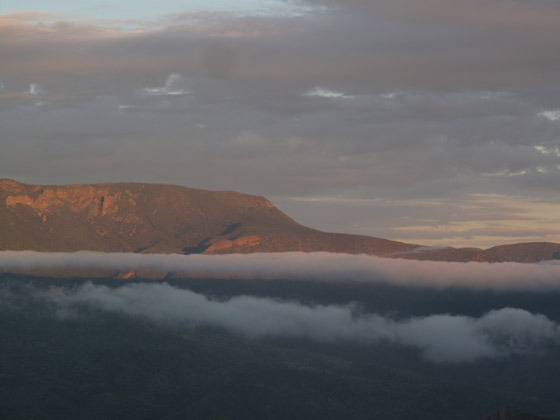