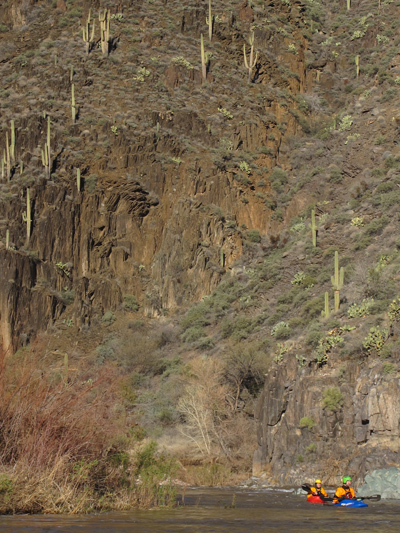 A subtropical airmass brought snow levels to over 8,000 feet, and dumped two inches of rain on much of Arizona’s Mogollon Rim during the last weekend of January, 2013. Paddlers hit the weekend water with a fury to match the intensity of the storm, logging high water runs, first descents, rising-water surf sessions, and post-storm posse assaults.

Our team of John Govi, Lisa Gelczis, Jonothan Olsen, and myself put plastic to water on Oak Creek during Saturday morning. Leaves and sticks swirled in the dark water as we watched it go from 200 cfs to 300 cfs while we drove shuttle. By the time drysuits were zipped and ready, it was 400 cfs and rife with wayward firewood. We launched on 500 cfs in between the occasional passing tree branch, and took out prematurely an hour later on 1,000 cfs, after dodging one too many logs, Blackadar iceberg style, as we dropped down the tongues of rapids. When the lines you scout become choked with wood before you can get back to your boat and launch, it’s time to take out.

By Sunday much of the debris had cleared but the water remained high. There were daring descents of upper Oak Creek, a notoriously busy section of whitewater when high, and one close call at Grasshopper Falls, where three paddlers were simultaneously thrashed in the monster hole. Lives were spared, all equipment was not. There are two paddles and one boat still unaccounted for. If anyone has a find, please email funhogpress. 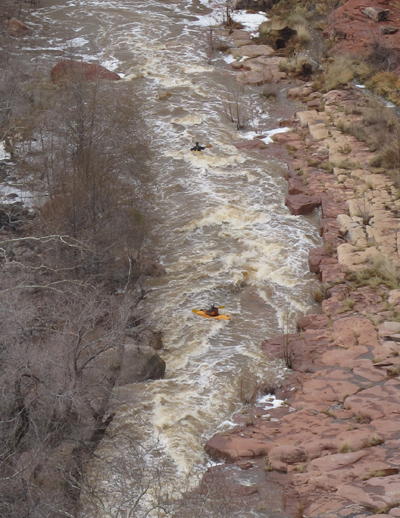 The Verde peaked at over 12,000 cfs, drawing river runners for several consecutive days. Fossil Creek saw runs on higher than normal flows. Tonto Creek was a popular destination by midweek, when it had finally dropped to playful levels. Reports are surfacing that Maricopa County Sheriff Deputies were blocking access to Sycamore Creek in the Mazatzal Mountains. If you are unjustly stopped from accessing a river, please contact American Whitewater, and join if you are not a member already.

Although much of the Arizona snowpack was lost with the warm storm, several inches of fresh snow came on the heels of the high water, and many locations over 7,500 feet still have above average snowpacks. The hydrology is primed, and with just a couple more good storms Arizona could be a land of rivers for the coming months. 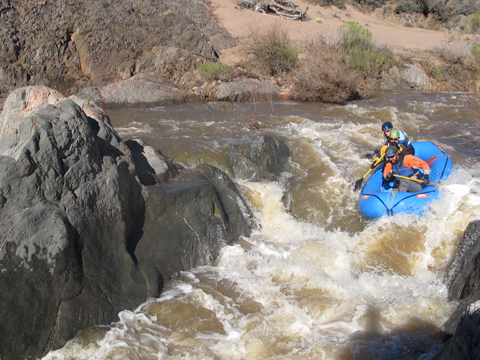