You can display the Full post on your Blog Page 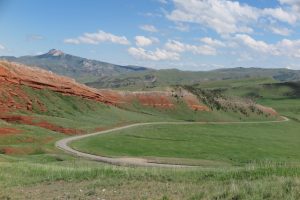 My psychology student wife, Lisa, tells me that our actions are mostly a result of socialization. I guess that’s why I feel compelled to drive north at the start of every summer. As a kid, it was always a journey from Arizona to northern Idaho, and my parent’s homeland of Spokane, Washington. First stop on the northern migration this year, rendezvous with my fellow nomad friend Orea on the far side of my homeland—the Colorado Plateau.

Next up was Wyoming, my least traveled western state. Time to change that. The Clarks Fork of the Yellowstone is one of the most storied whitewater rivers in North America. I’ve written about descents there plenty but never paddled or even seen the awesome gorge myself, until now. High spring water produced a string of non-stop class VI rapids that boomed aloud, even above the canyon rim. 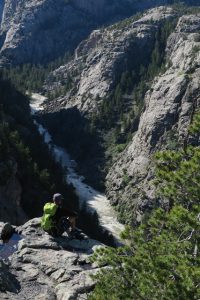 You can’t pass through Yellowstone without hiking up the Lamar Valley, can you? This is the Serengeti of the United States. I dodged buffalo herds, and sat quietly watching one group of 100 hunker down for a midday nap. 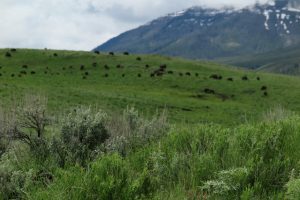 The ostensible reason for all this noodling about the Great American West was research for a story that will run in American Forests magazine. So, it was into Idaho’s Clearwater Mountains to investigate the coastal disjunct zone of the Inland Northwest. 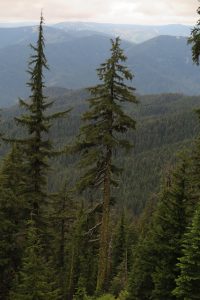 I paddled the Little North Fork of the Clearwater River 23 years ago. Back then, I was looking for whitewater. I found it, along with some big trees. This time I was looking to avoid most of the whitewater, and find the most ancient forests. With my friend Bret Simmons and two pack rafts, our mission was completed. Northern migration complete; time to return to Flagstaff, and the glorious monsoon. 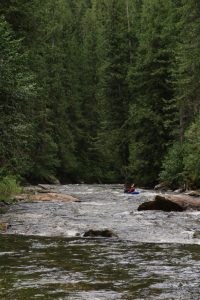 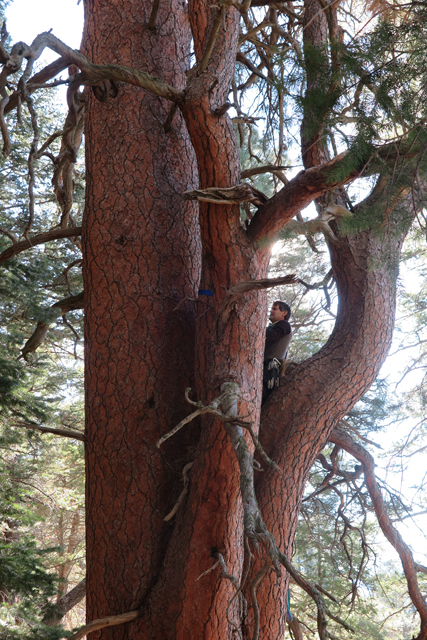 This blob brought to you by Funhog Press 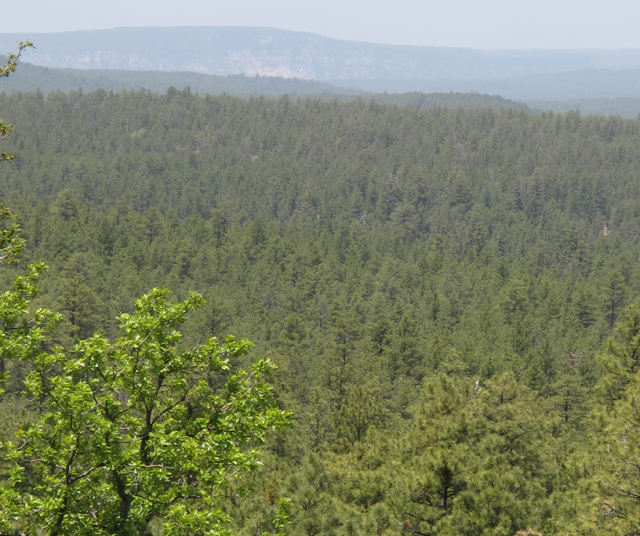 An investigation ensued. Nothing revealed itself immediately. An orange trunk glowed behind nearby foliage. I drew closer, the trunk got bigger, the TREE got bigger. A moment of awe commenced. If measured by wood volume, it is almost surely the biggest ponderosa pine in Arizona. By American Forest points, I’ve measured slightly bigger ones, but seen none greater. We call it El Rey—The King. 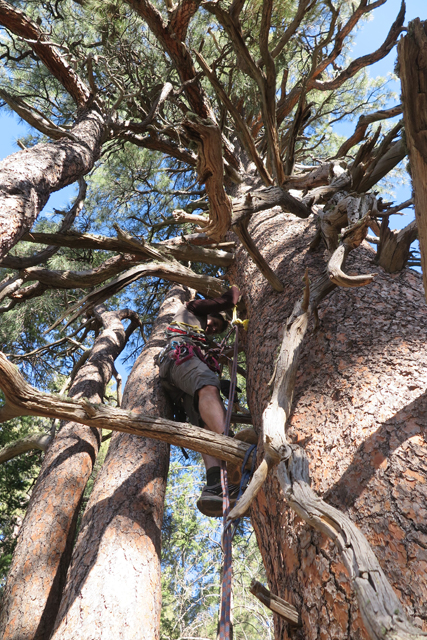 I’ve been to the tree 7 times now, climbed it once. Govi led, slinging dead branch staubs for protection. It was a little sappy at the top, and not that great a view. But the rappel back down, with the massive trunk expanding as we dropped, that was very cool. I have a new friend. 117′ tall, 221″ circumference, 20′ average crown, 396 AF points. 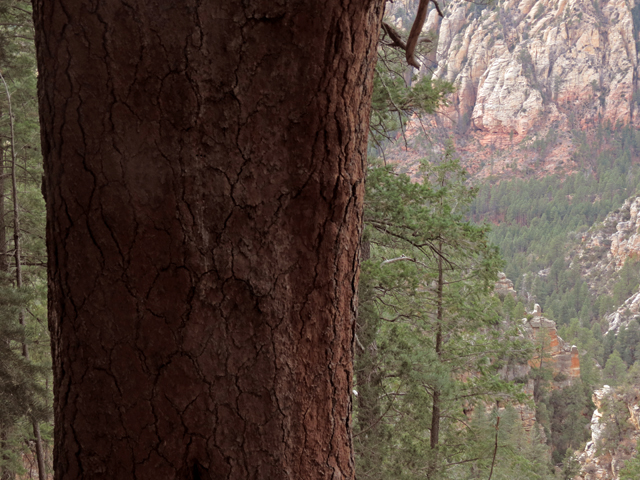 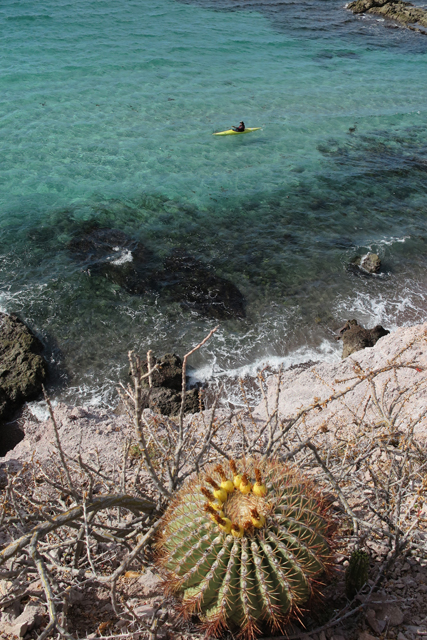 The trip started at 35,000 feet, en route to Chile. I knew we were over the Mexican coast well north of the Tropics, but I wasn’t sure where. The land was desert. The coastline was empty, and full of coves, with rugged desert mountains rising straight from the sea. 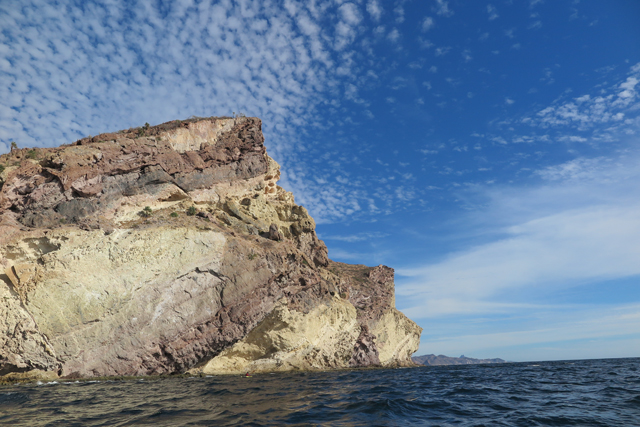 Turns out, this was mainland Mexico, just north of San Carlos, a resort town I’d visited a few times with my family when I was a child. Then, we’d made sand castles on the beach. I was too young to go on the great thorny bushwhack to the top of the mountain, darnit. This time, I wanted to plop a boat in the water. 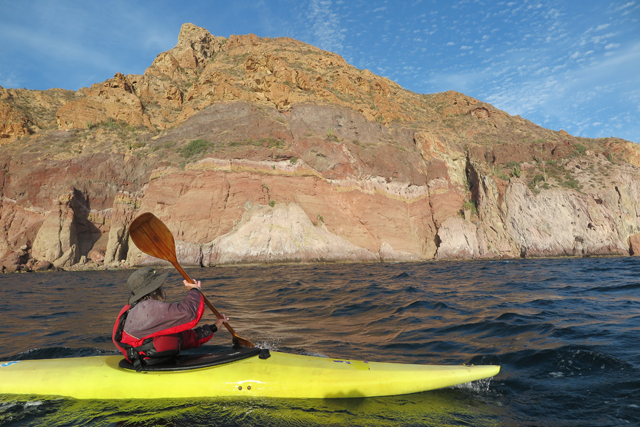 Lisa and I drove to the last house in the last village. The fellow there said, “Si, no problema.” We parked in his yard and offered some gifts. The water was brilliantly clear, and I was immediately impressed with the size of the swells. 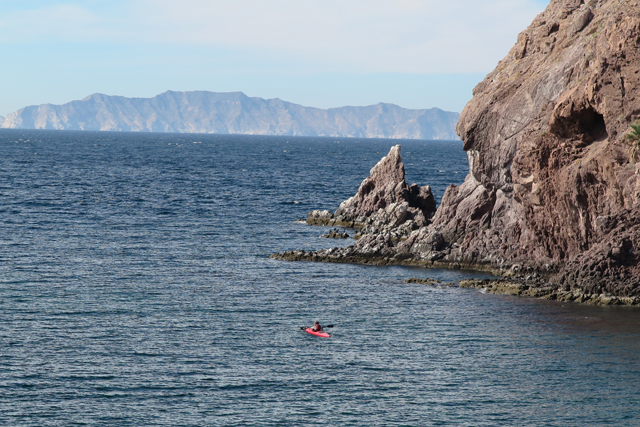 Our first camp came within a palm-studded canyon. Palm trees and saguaro, it was all very exotic, but familiar too. The mountains looked like the Superstitions, but with palm trees, along the Sea of Cortez.

We paddled into the wind for three days, returning in one and a half. It was never over 80 degrees and never under 50. There were colorful fish under the water, which was warm enough for comfortable wetsuit swimming. I sense an annual trip developing. 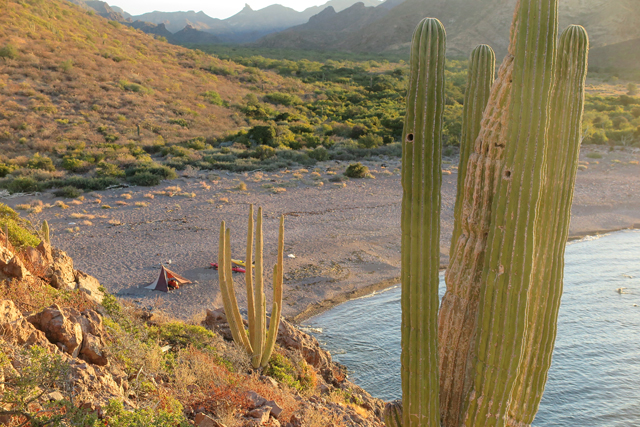 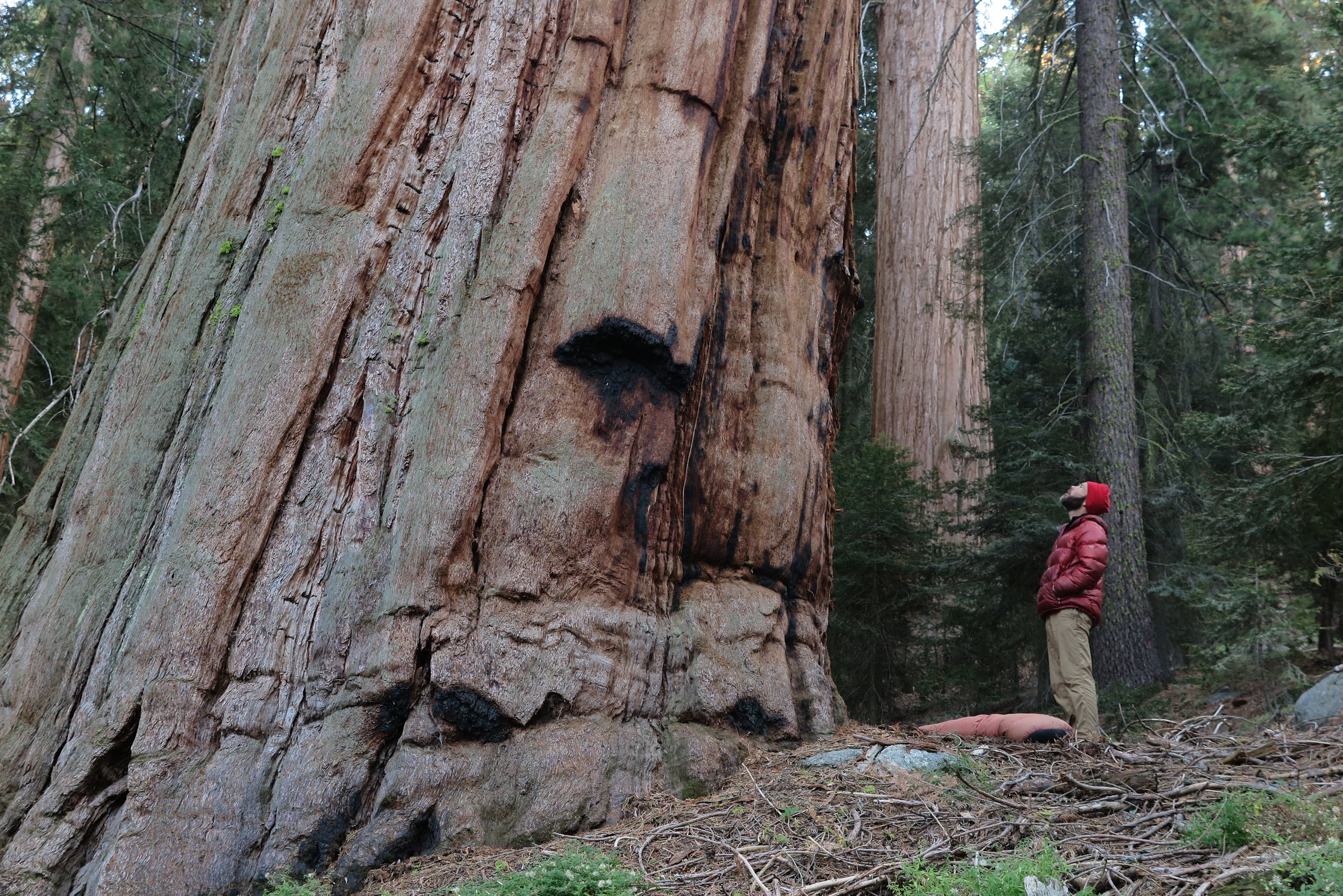 In A Guide to the Sequoia Groves of California, author Dwight Willard states, “Eden Creek Grove has biological significance that far surpasses its renown.” As for exploring there, Willard warns that it is “only for the most capable and resolute adventurer.” That was all the enticement I needed. Eden Creek would provide the perfect centerpiece for an article on the remote sequoia groves of the Sierra Nevada. American Forests magazine agreed, and I was off to the great forests of the southern Sierra. 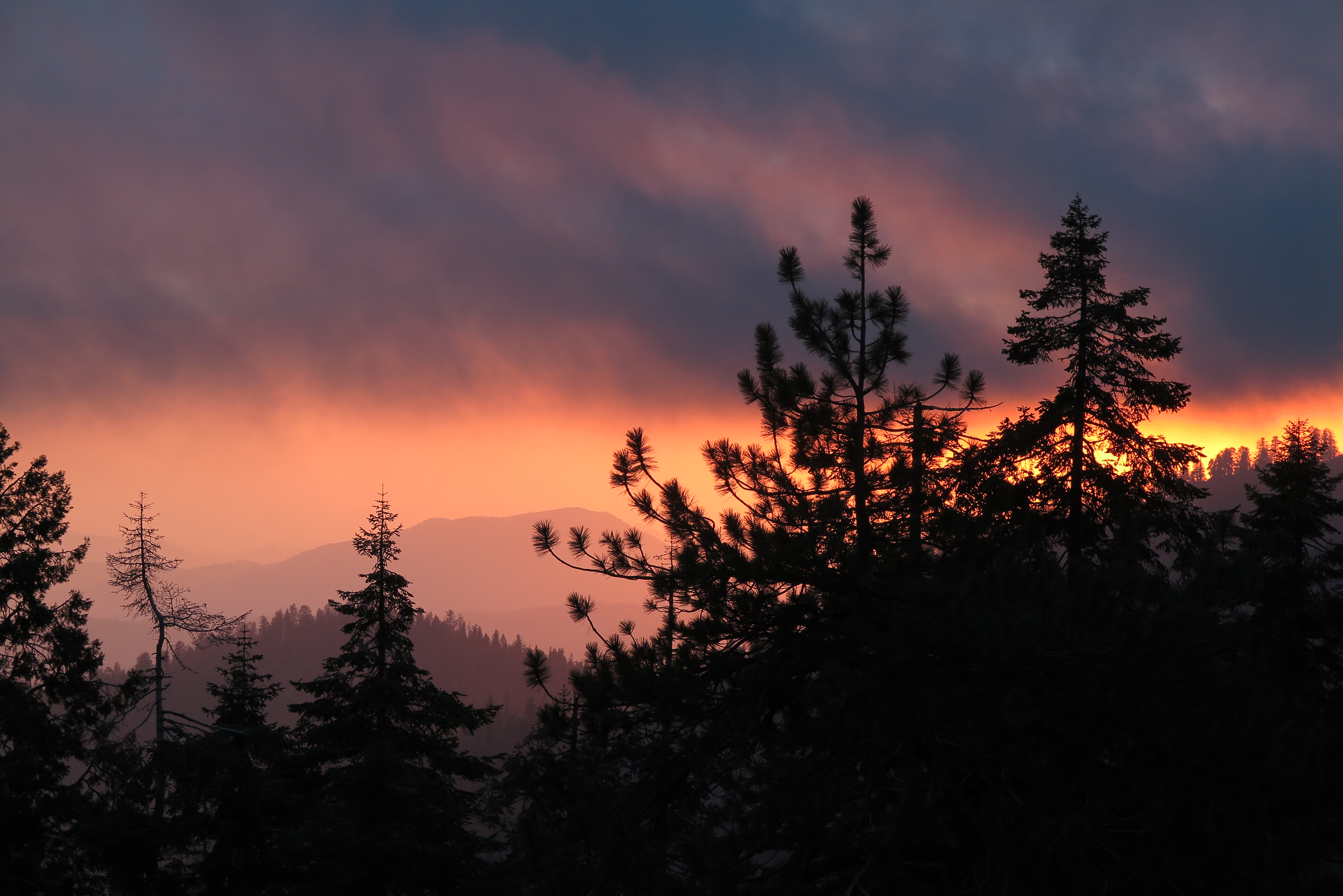 John Muir trekked across the length of sequoia country in 1875, leaving Yosemite Valley in late August and reaching the southernmost sequoias, in the Deer Creek drainage south of the Tule River, by October. I would only nibble at Muir’s expedition, exploring an area where he reported, “way making here seemed to become more and more difficult.” 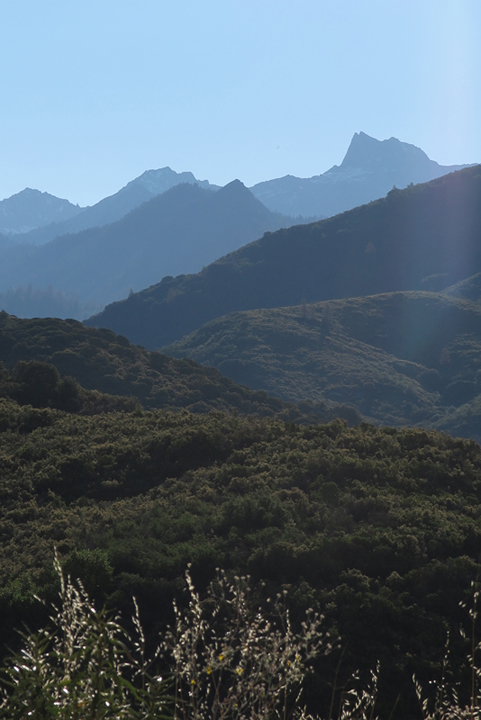 My way making, too, was plenty difficult, but not impossible. The striking beauty of lower Eden Creek made the boulder hopping and poison oak dodging worthwhile. 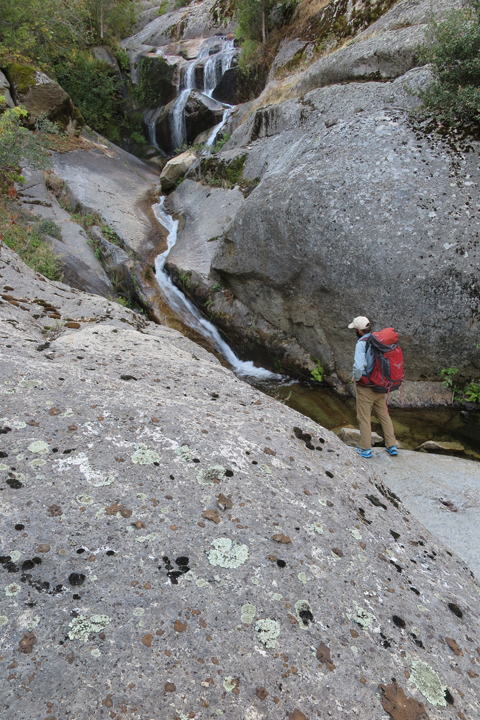 Well beyond the zone of casual hikers, I spotted a soda can beneath a boulder, with a bullet hole in it. Next was a lawn chair half-buried in the creek. I began to wonder aloud, “Who the heck would bring a lawn chair way up…” the answer struck me silent—cartels. The rugged and dense low elevation forests of the southern Sierra Nevada served as ideal growing locales for big drug syndicates’ marijuana crops. Legalization has made the practice less profitable of late, and most of these illegal forest grows have faded away. Still, when I came across their abandoned irrigation pipe, I moved quietly, as if I were hunting. But in this scenario, it was I who might be the prey. 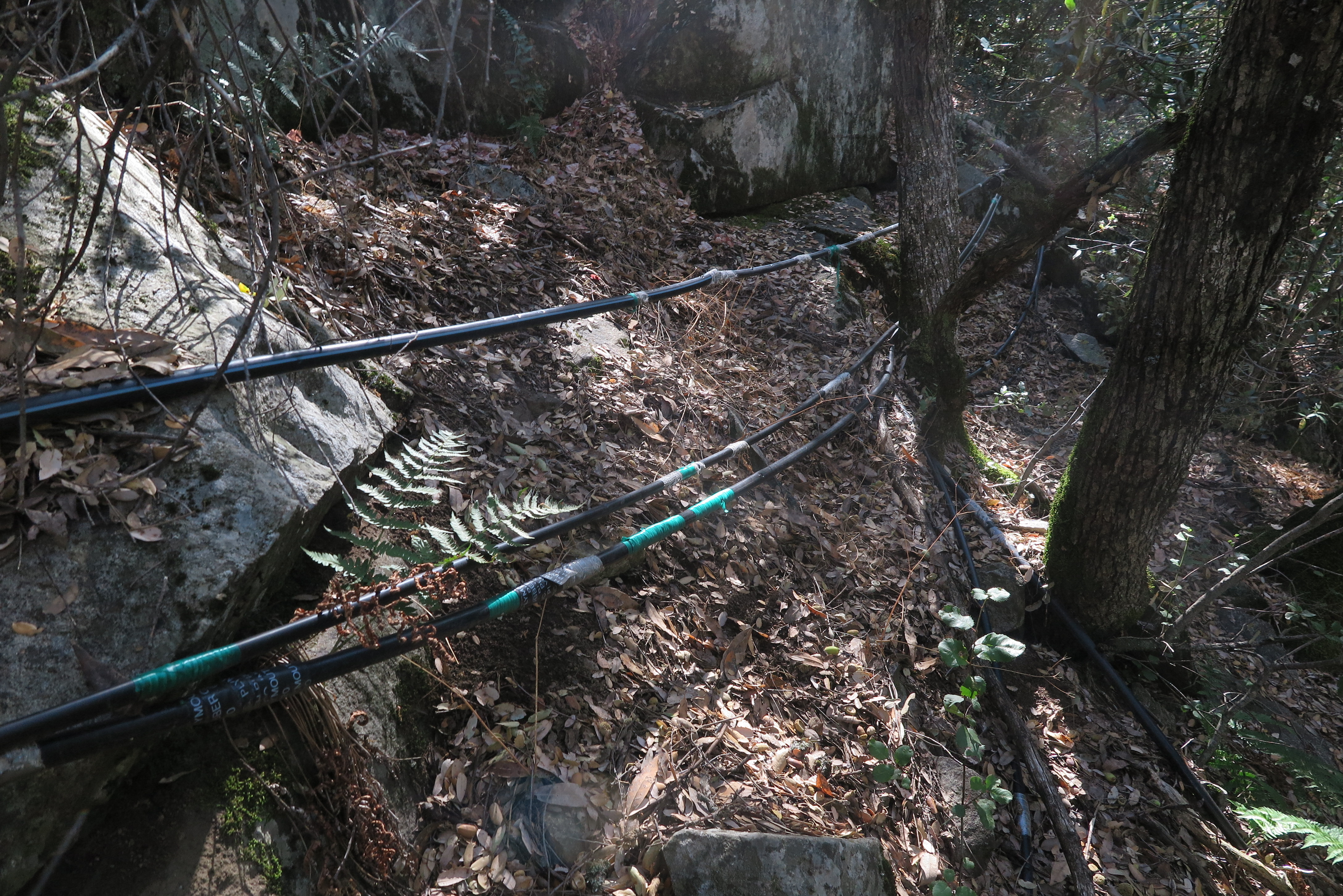 As suspected, the grow operation was a thing of the past, and soon I was beyond their abandoned infrastructure and into the conifer zone. A bear ambled past. Later, I fell off a log and sprained my ankle. By evening, I was limping into the sequoia grove looking for a soft sleeping spot where I might place my old flattened therm-a-rest. I found and manipulated a bed of forest duff, only to be rousted in the night by the sound of a falling tree. 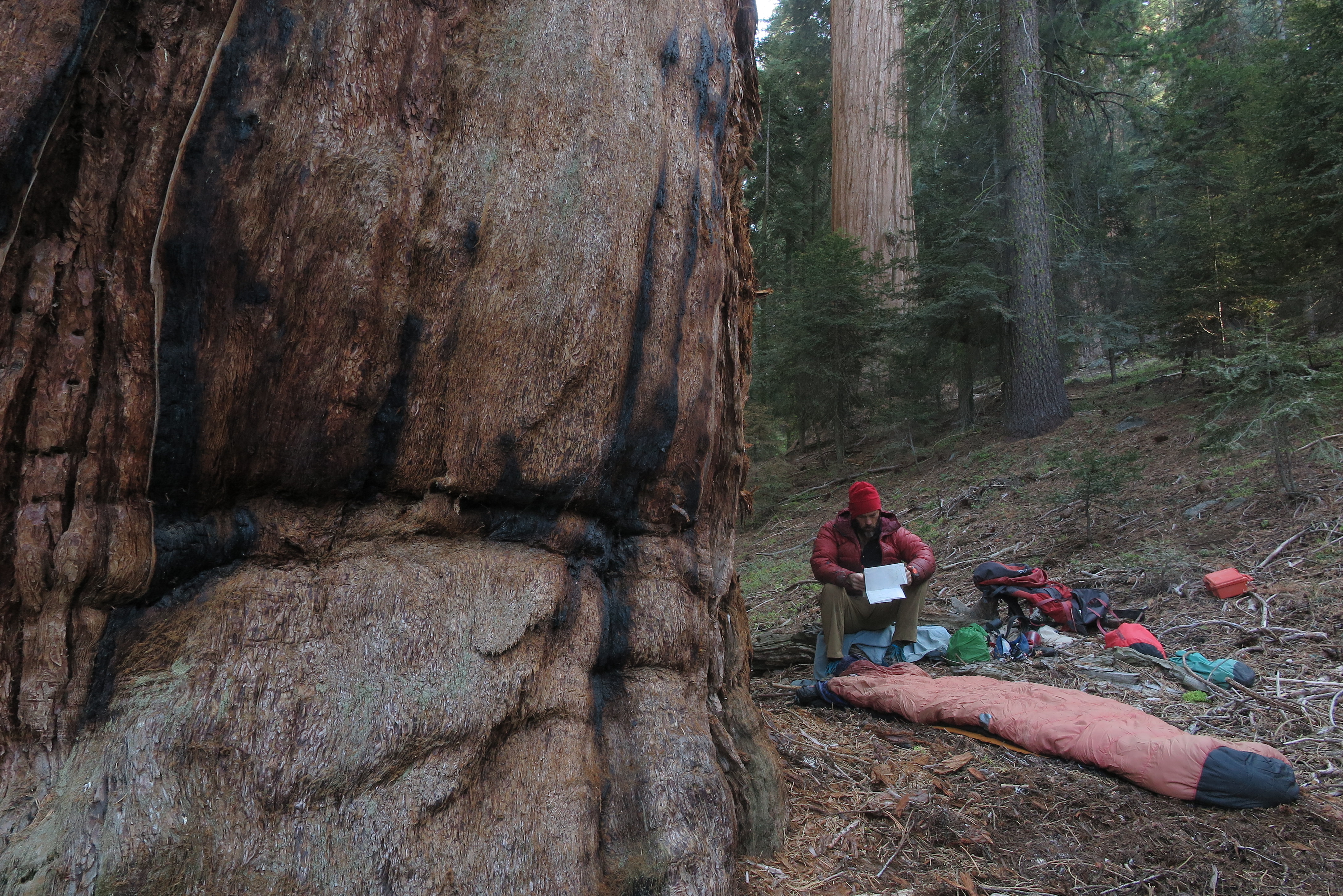 Still mostly intact by morning, I sat and rested, watching the morning sunshine illuminate the giants. By afternoon, I was wandering the grove, reflecting on Muir and his unequaled sequoia transect from centuries past. I might not get a chance to retrace that trek, but even following a few of his footsteps was an exercise in renewal. 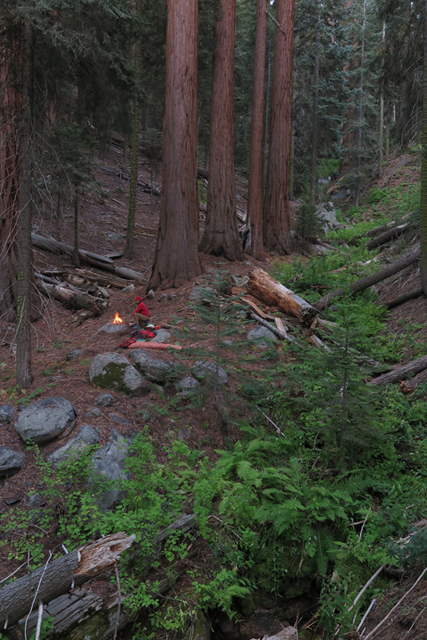