“Rock! Rock! Rock!” Mike yelled as a three-hundred-pound sandstone block crashed down the cliff below us. Lisa was down there, somewhere. I joined his warning chorus, but remained too occupied dangling a tethered kayak off the edge to recognize the situation immediately. By the time I made sense of what had just happened, it was all over. The last of the rockslide echoed from the bottom of the canyon, and Lisa shouted a welcome “I’m okay.” It wasn’t your typical put-in for a class III day run.

Yet very little is typical when kayaking near Winslow, Arizona. The landscape is Kansas-flat wind-swept steppe. Distant mesas of the Hopi lands break the monotony somewhat, but not exactly in a verdant water world kind of way. When Jackson Browne wrote about a guy standing on the corner here, he definitely didn’t have a whitewater boat on his shoulder. 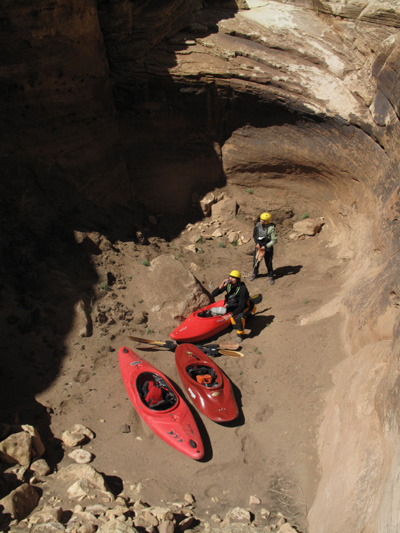 But oh what the desert hides! Hidden beneath this high desert are narrow gorges, and for a brief time each spring, the slots carry snowmelt from the Mogollon Plateau. The runoff snakes between the walls, creating mazes of incongruous, tumbling whitewater. Accessing the water can be a tricky task, ensconsed between vertical cliffs as it is, hence the rockfall and dangling boats.

Once below the put-in cliff, we walked a quarter-mile to the water, where I once spooked a family of drinking javelina. Trapped, the wild desert pigs made a dash past with only feet to spare in the confined canyon. Today it was we humans who were nearly trapped, thanks to a giant pothole in the canyon that had formed with the last flash flood. With another round of rope-lowered boats and an unprotected 5.4 traverse, we were finally ready to go boating!

Although I provided overview descriptions, neither of the Winslow area creeks made it into my Paddling Arizona book as complete entries. The access is just too funky. No matter how you slice it, finding the river is just part of the adventure when exploring the whitewater Mecca of Winslow, Arizona.