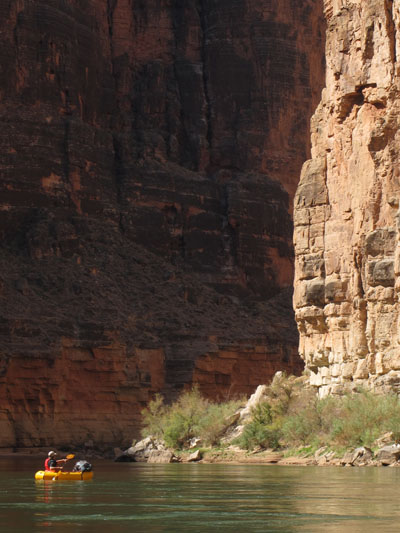 We had just passed the exposed ledges, where a fall would be your last, when the light began to fade. Despite my denial of the impending darkness, it was obvious that the cairns we followed were no longer apparent against the backdrop of broken sandstone. We had lost the route. Now, it would certainly be dark by the time we rimmed out. If we should be so lucky.

We really didn’t need any more spice to our trip. It had been a gorgeous autumn day in the depths of Marble Canyon, relaxing for those of us in legitimate pack rafts, a bit more stressful for Govi, in his eighteen dollar China special. He was dubious about his pool toy from the start, having taken the time to label it “The Sea Hag” in appropriately scribbled black marker. Before we even launched, it had a leak, rubbed through where the little plastic blow-up valve was packed against the fabric in his pack. I was actually thrilled at the development, having gained an opportunity to use the emergency repair kit I’d hauled around for years with no reason to employ. It worked brilliantly, and with a little duct tape addition around midday, The Sea Hag made it to our destination—6.8 miles below our launch. Govi counted every tenth.

Reaching this unusual put-in at the bottom of Marble Gorge was really the whole point of our excursion, the rest was just escape. That is sort of what canyoneering is all about, escape. You plunge into a dark foreboding place, and then you try to get out, and the only way out, usually, is out the bottom.

We didn’t even get to the canyon depths until afternoon, having scrambled through the Kaibab and Toroweap, boulder hopped through the Coconino and Hermit, and stepped down thigh quivering steps of the Supai. Finally, as clouds gathered, we de-robed and re-robed into wetsuits for a descent into the Redwall Limestone, Grand Canyon’s signature layer.

Following a robust monsoon season, the canyon was flush with pools, chocolate brown and pleasantly warm. Almost every rappel ended in the water, and twice we had to pull the rope while floating, or should I say treading, and whining. With the exception of the profligate water, the canyon was much as I remembered it from several years ago, on the first descent with Glenn Rink, Mike Harris, and Bill Hatcher. On that day, we had a boat, a real boat, waiting for us at the mouth. This time around, our boats (and Govi’s pool toy) were in our packs, and it was good that nobody waited at the river, because they’d have been worried. We could hear the mighty Colorado from a couple turns above, a sweet sound when daylight is fading. Our last rappel came at dusk. The long days of summer were over.

This fact might have spurred us into action the next day, but damn that Gorge is beautiful, and I don’t get to hike up Buck Farm Canyon near often enough, so we lingered and lolly-gagged our way downstream. Still, we’d have been right on pace had a dory trip not pulled in as we packed away our rafts. Our old friend Andre was there, and Jim, and photographer John Blaustein, and a host of other good folks who showed us true river hospitality which we were happy to abide.

So my companions finished the last two beers at the top of the Redwall, while I had the first realization that we might be hiking out in the dark. The light was indeed stunning as we marched across the desert. Cliffs of burnished orange loomed, beautiful and intimidating. We stopped and got out headlamps about the same time we lost the route, which was about the same time we lost daylight. From there it was a game of deliberate movement and careful communication. Don’t panic. Don’t roll a rock.

I was glad to be familiar with the gully when Govi asked, “Are we supposed to go under this rock?” His headlamp illuminated the underside of a giant chokestone wedged between the cliff walls, the trademark feature of Eminence Break, where the ancient ones rambled in rope sandals during centuries past, relieved to pass under the massive stone, just as we did, to emerge into the big skies, the land of the bright moon, and home.