The original plan had us hiking into the Canyon under a full moon, but as we donned headlamps in the shelter of Eric’s truck, the night outside was black as coal. There wasn’t a moon in sight, and a steady mist had me wondering just how wet I’d get beneath my high-tech shell—a twenty-year-old wool sweater.

This was my first expedition with Eric Leifer’s Delving Deeper project, which proposes to explore the innumerable canyoneering possibilities within the greatest gorge of them all—Grand Canyon. His latest escapade took us (Eric Leifer, Dylan Ross, TW, Angie Fuhrman, and John Govi) to the upper forks of Deer Creek.

We made it to the Esplanade level two-thousand-feet below with the aid of our lights, and my trusty ski sweater kept me warm if not dry, but the patter of raindrops persisted through the night. In the morning, clouds draped over the North Rim. There wouldn’t be any canyoneering swims through cold pools today. Fortunately, we had recently gained information on the East Fork of Deer Creek, indicating that the swim potential in that fork was minimal. In fact, adventure photographer Bill Hatcher had ascended the canyon in 2007, an impressive feat as we would soon discover.

A trickle of running water from the recent rain coursed down the creekbed. We boulder-hopped along, making good progress until reaching a large cliff in the red Supai Formation. A short downclimb followed by a traverse and a long descent on loose rain lubricated slopes had us at the Redwall Limestone, the layer that promised the most technical difficulty of the route.

Our first rappel came at a choke-stone that Hatcher had detailed in his report. A dozen feet on rope delivered us to a polished limestone narrows. I lingered, taking pictures while Govi probed downstream. “It looks like we’re gonna be swimming,” he called from below, to our collective chagrin. It was deep, but short. We moved quickly downstream to a patch of sunshine—the first of the day. By the time lunch was over, we had nearly forgotten the chill of the water.

It would be our last swim, but not our last rappel. That came in the lower Redwall, where the creekbed plunged over a 140’ drop. Dour grey walls overlapped in folding patterns as we gazed downstream, wondering what was next. We all made it down safely and the rope pulled cleanly. It was only then that we speculated on how Bill Hatcher had managed to climb up this spot. A crack here, a stem there, one terribly exposed ledge crawl…I could see how it was possible, but I was glad to be going downstream, with a rope.

It was several more hours of down climbing, boulder hopping, cobble walking, willow crawling, and scree-field tip-toeing before we reached the confluence of the main stem of Deer Creek, and made camp. A week of showery weather had made the desert soil into a soft green mat perfect for relaxing, even if your sleeping pad consisted of a lumpy wetsuit like Leifer’s.

There was one last pitch of steep boulders to negotiate before we reached the gushing springs that produce the perennial water of Deer Creek. We tanked up, and began the march uphill. Now the clouds were welcomed. Late in the day, weak sunshine penetrated, giving trademark glow to the expansive slickrock of the Esplanade. A chill wind blew through auburn oak leaves on the rim, where my wife Lisa, fresh off her own wanderings, waited with cold beers and salty chips as we ended like we began, in the dark. 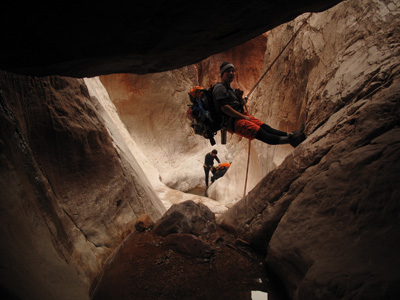