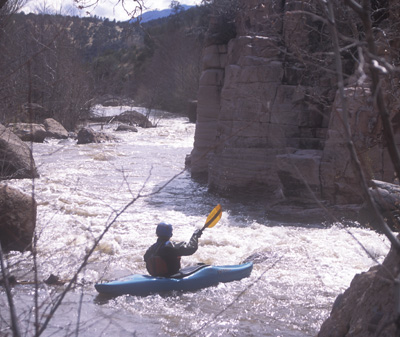 I first met Jim McComb standing ankle-deep in mud. It was February 20th, 1993, a record high water day for Arizona rivers, and McComb, trailed by three others, was marching through the slop to get a look at the high water. We stood on the rim of the Agua Fria River gorge, transfixed by a brown frothing 15,000 cubic feet per second of floodwater. I wanted no part of the angry river. Some of the others feigned interest. Jim steered the democratic debate back to sanity, and we drove to the lower river, where the high water still provided plenty of action.

Our relationship followed a predictable pattern over the next twenty years, lying dormant for months, even years, before springing back to life with the sudden bursts of Arizona’s capricious river seasons. We convened for the remote Blue a few years back, each of us driving for several hours to camp in the rain and paddle a scratchy fence-riddled stream that neither of us had done before. The Blue held more flatwater than Jim normally preferred, but it ran through purely wild country—we saw eagles and bears—and we both loved floating through Arizona’s wild country.

As we arranged logistics for the trip, Jim queried, in his abrupt way, “How many have you got?” “Just me,” I replied. “All right I guess it’s just the two of us,” he snorted with some disgust, incredulous that nobody else found it so keenly appealing as we did, to drive through the night and camp in the rain. Normally, Jim arrived at put-ins with an entourage, not so much because he was the guy who knew the shuttle roads and pinpointed the water levels, which of course he was, but because he was genuinely excited to turn others onto something that infinitely fired his own wonderment. We stopped at an end-of-the-road ranch along the Blue where a McComb family acquaintance resided. Dr. McComb, the esteemed physician, had to introduce himself from behind his trademark blue kayak helmet with a kicker’s single bar facemask. The rancher asked if this kayaking stuff was fun. Jim responded in a rare hushed voice, heightening his reply. “More fun than you can imagine.” I remember thinking, “Wow, this guy is even more passionate about paddling than I am!” Jim was hardly one-dimensional, however. On the Blue, he spoke of his family and his medical practice and snowboarding trips to Telluride. He was thrilled to learn that I had started hunting elk, and promptly offered his best tips.

Still, McComb was a kayaking devotee. After Arizona’s brief spring season, he regularly traveled to California, Colorado, and Idaho to milk the remainder of the paddling year. His intense interest combined with his thorough knowledge of Arizona’s backcountry made him a force of whitewater exploration. Whenever I discussed a potential new run with McComb, there was never any explanation required. He always had it investigated ahead of me.

His crowning achievement in Arizona’s paddling history was the first descent of Tonto Creek’s Hellsgate Canyon. Jim and his chief partner for many years, Rob Reiterman, completed that puzzle in 1997, picking their way through a myriad of committing hard-rock gorges to finish the 26-mile run in three and a half days. Those few days only hint at the effort required to explore the classic reach, however. Before paddling Hellsgate, McComb led five scouting trips into Tonto’s gorges, once hobbling out on a broken ankle, duct-taped together in pure McComb style.

At age 64, Jim was no longer probing class V firsts, but he was still charging. He used to say that our bodies go through different physical stages in life: rubber, cardboard, and china. Jim certainly saw china on the horizon. Limping on a cane from sciatic pain several years ago, he graciously attended a slide show of mine. I can recall him grumbling that night, “It’s a hell of a way to live, ain’t it?” Jim needed to live at full-throttle. He recovered from that injury, and was back in his element, in his kayak, when he took his last stroke. McComb never stopped kayaking. For his last day of this life, Jim was on the East Verde River, precisely in the heart of central Arizona wilderness, deep in wild country, perfectly at home.