The blog brought to you by Funhog Press

Clouds began to stack up, hastening departure from our post-adrenaline lunch break. We rounded a point at the end of San Francisco Island and once again, it was game-on. I stayed close to shore where rebound waves, called “clapotis” in sea kayak terms, sometimes surged me forward. Little crenulations in the coastline provided modest shelter from the torrent. Small headlands brought mini-hurricanes. 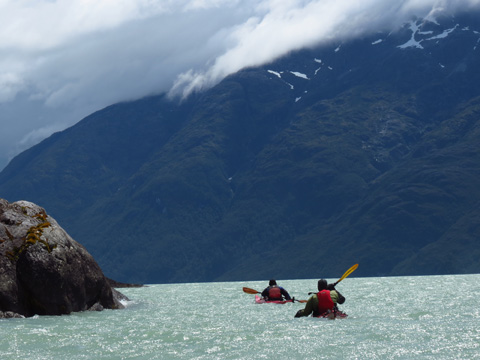 At a major point, we gathered for a 50-yard sprint against the tempest. I estimated the wind blowing a steady 40 miles-per-hour, with gusts to 60. A desperate two-minute battle delivered us to the bay, where the wind tapered to a breeze. Darkness was not far off. A beach on the far side of the bay was our goal. Roberto thought a rancho might exist here. If so, we might get a message out on their radio. Diana could get word out to change her flight, or at least call off the impending search for us. We had hoped to be back in Tortel on Tuesday. It was now Wednesday, and we were still at least a day out. And the schedule wasn’t up to us. This wind was making the call now. 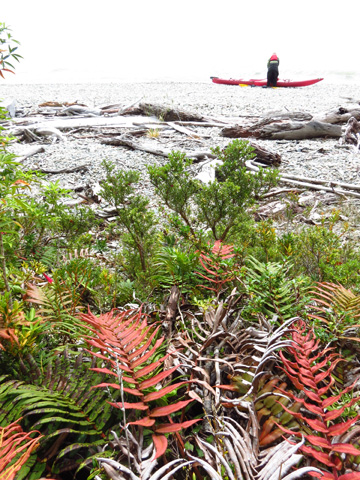 We reached the beach at dusk. I was working on a fire when Roberto reported that this was in fact the campo, but it was long abandoned. There would be no radio tonight. Lisa got the tent pitched in a strengthening drizzle. We feasted on pasta and quickly retired to our tents. The staccato tap of rain on nylon droned all night. At dawn it still poured, and the channel looked huge. By 11 am, the deluge tapered. We emerged from our shelters to look out at a channel that remained raucous. The 8-mile crossing that awaited at the end of the island was obviously a no-go, but we had to keep moving. Our food supply was dwindling. 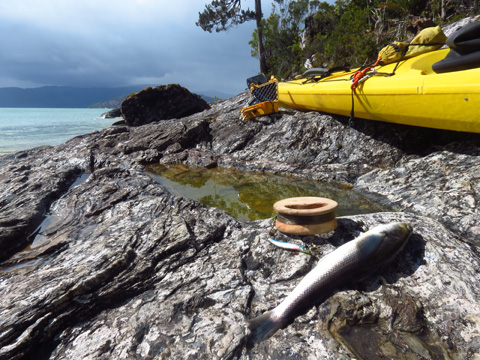 A short paddle down the wind-battered coast brought us to the tip of the island where we camped on a sheltered narrow beach, our tents stacked side by side beside the campfire. I crawled and hacked across a headland to hang Roberto’s yellow Escualos flag from an overhanging coihue tree, so that any passing boats would see it, and hopefully us. When I returned, Roberto had caught three fish. This was a great relief to our building hunger. Again, it rained hard all night. 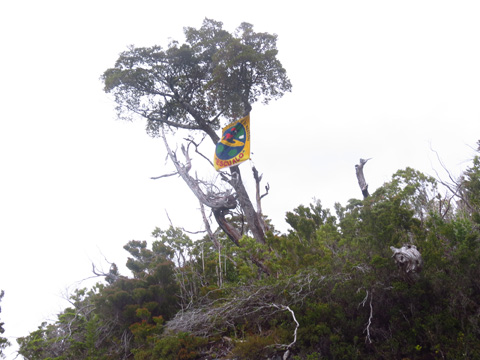 By morning, the ground beneath our sleeping area was oozing with water. The earth was saturated, and springs were forming right under us. Lisa put on her drysuit and stepped into the steady shower. She returned moments later to report that the channel winds were down. The team began to break camp, but it’s not an easy process amidst Patagonian storm. By the time we were nearly ready, the winds sparked up again. 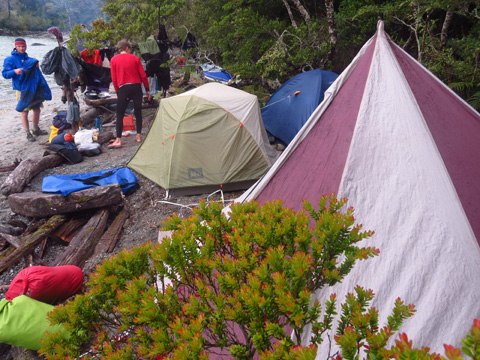 We remained in paddling clothes just in case the wind died, but we also prepared for another night on the island. All five of us struggled, and finally succeeded, to get a fire going in the soggy conditions. I built a gravel platform to elevate our bed above the water in the tent. Lisa gathered driftwood from a beach across the cove. As Roberto fished stoically in the continuing rain, we gringos sang songs around the fire, exhausting the Simon and Garfunkel songbook before turning our attentions to Roberto’s catch, and another dinner of whole fish soup. 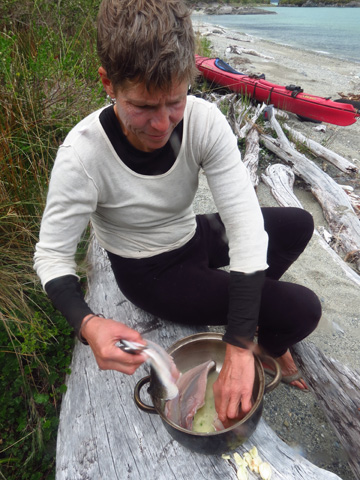 The rain stopped by dawn, and I crept out to see the calmest sea in days. “Hey you guys, I think we should bust a move,” I crowed anxiously. We paddled onto a gentle swell beyond the point as a loud hum approached from the far side of the island. The plane banked toward shore, passing directly over us at 200 feet, and continued flying south. It was obviously a search plane. Clearly, it hadn’t seen us.