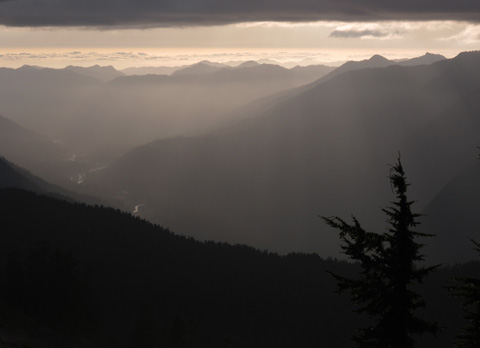 The groomed elk path vanished, and we found ourselves in the deep woods, linking passages in old growth forest—wading through huckleberry bushes, sliding down gullies, stepping over and into rotten mossy logs. By moving slowly and carefully, we could make steady progress without undue risk. Unfortunately, we didn’t have the luxury of slow caution. Darkness crept up from the depths, and the thought of bushwhacking by headlamp into the Queets River gorge nagged at me with every new horizon of trees unfolding ahead. At least the river chimed encouragement from below, far below. 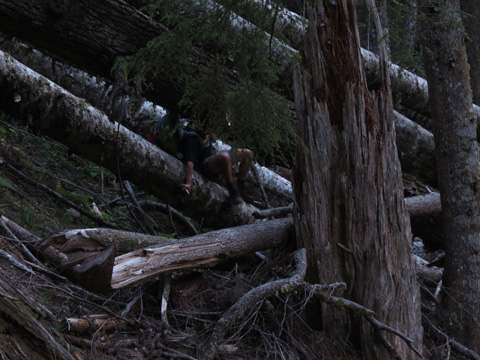 Rivers of the Olympic Peninsula offer opportunity to float through one of the world’s great forest reserves. When comparing forests of big trees, the Olympic rainforest is unequaled. Nowhere else do so many trees of large diameter—5 to 15 feet—and soaring height—200 to 300 feet—exist in a single unmolested unit. Walking through these forests gets one up close and personal with the giants. Floating here offers longer views to the multi-storied canopy. Our pack raft trip down the Queets River promised a little of both. 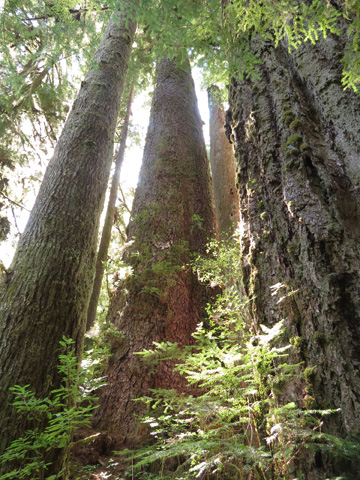 Climbing above the North Fork of the Quinalt on day one was a humid, even muggy affair, appropriate conditions for the beefy hemlocks and massive cedars that loomed over our trail. The balmy feel abated by morning, when fog formed before our eyes as the transpiring forest released its moisture with the rising sun. 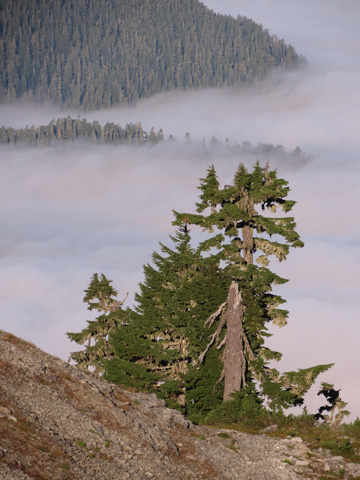 Up we marched, out of the cloud and into the changing forest of the mid-elevations. The cedars changed from red to yellow, the hemlocks from western to mountain, and the firs from Douglas to silver. The record Alaska, or yellow, cedar, gave us reason to pause for a photo and due reverence, a wonderful gnarly old tree. When we spotted another huge Callitropsis nootkatensis an hour down the trail, we felt compelled to measure it and compare numbers. By my rough measurements, the old champion retains the title, but the two trees are close enough in size to warrant a return with tape and laser to record exact dimensions. A new champion could be on deck! 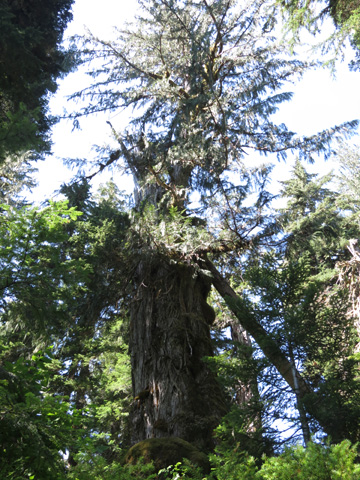 Emerging from the forest into sunny subalpine parks of distinct Olympic lime-green, we shed our packs for a quick swim in a shallow cool pond. Onward, upward, downward, the “traverse” trail seemed to constantly climb or descend. 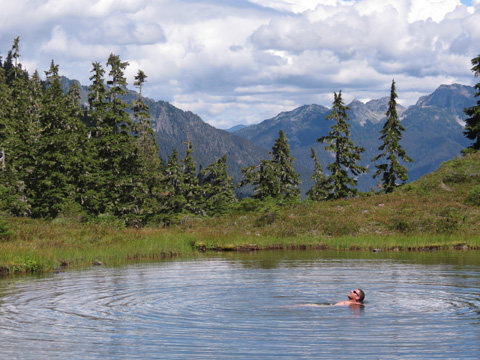 We pushed on toward an airy ridge where Mt. Olympus and its trademark glaciers burst into view. The Queets was visible below, glistening like a silver ribbon on the dark woods. A snowfield rested nearby, assuring our water supply. This was camp. 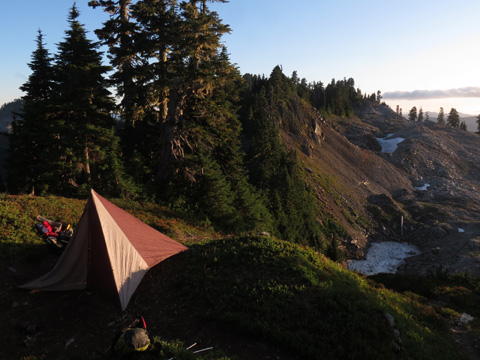 Another long day of up and down hiking along the Skyline Route led to Lake Beauty, and the first other backpackers we’d seen. 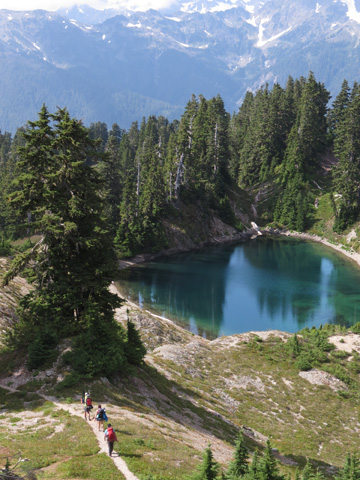 Soon we were hustling into the gorge in a race against darkness. With twenty minutes of light remaining, the opaque color of the upper Queets peeked out beneath cedar boughs. At water’s edge, we found ourselves in a gorge of smooth grey walls. Luckily, a mossy camp presented itself, sitting beside a cold spring-fed creek feeding the river. 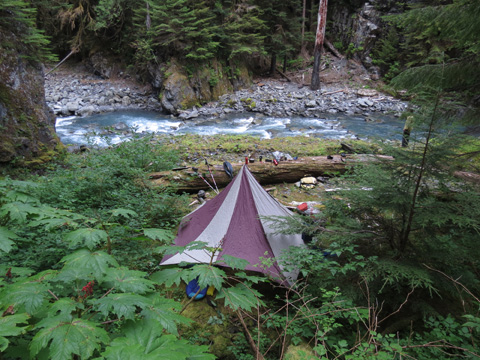 I hadn’t planned on much whitewater during this almost-source-to-sea mission, but our route into the canyon deposited us farther upstream than anticipated. Although we were below the unrunnable Service Falls gorge, several rapids remained before our deliverance into the valley. Bret had never paddled a pack raft before. His game face was on. 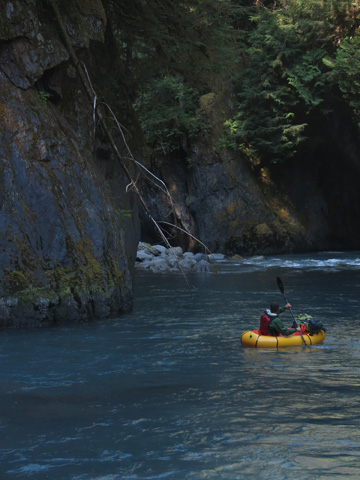 Following a full scale portage (boats deflated in packs) around class V Kilkelly Rapids, we re-launched in late afternoon sunlight and pitched camp amid the wild Upper Queets Valley. Surrounded by old-growth forest in a rarely traveled river corridor, this was the place, the moment I’d been seeking since scanning the map from my living room floor years earlier. 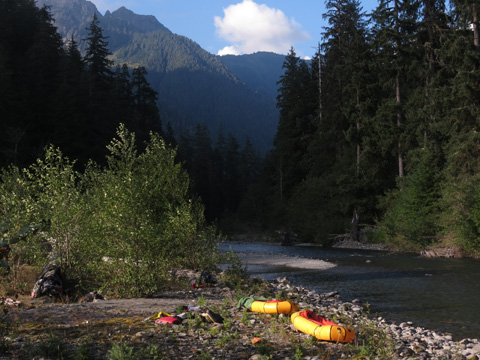 Day five was about making miles. Low water crept us along and logjams forced several short portages. A herd of elk, the first we’d seen despite plentiful sign, crossed the river above camp just as dusk turned to dark. Another small herd crossed the shallow river while we ate lunch two days farther downstream. 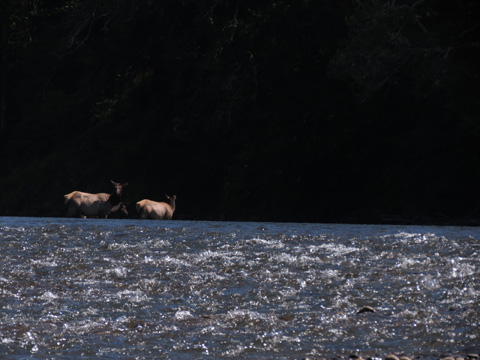 It was not elk but fish that the natives were after near the river mouth. From the highway 101 bridge we could see numerous skiffs plying the water between their nets of coho salmon. The river debauched into the Pacific as a narrow stream carving through a fog-shrouded coastline. The humble opening gave few clues to the wild splendor that exists upstream, on the wild Queets. 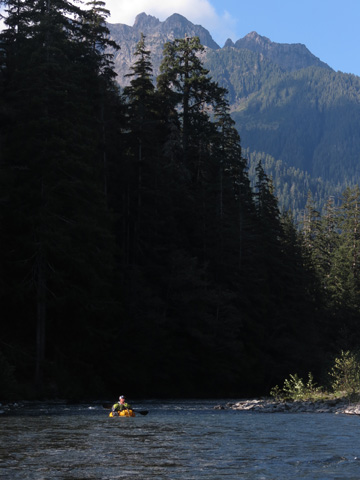