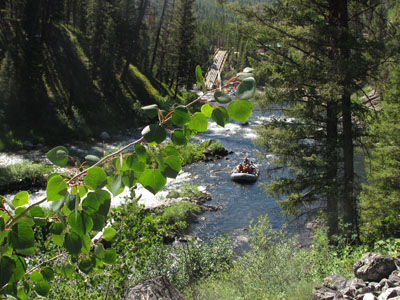 The river sprawled from bank to bank, rippling over rocks that were just inches below the surface. Steering my pack raft through the cobbles required care. Rowing an 18-foot gear boat on the shallow river seemed silly, a game of delicate oar dipping, rock pivoting, momentum, and a little luck. Yet even the 18-footers were not the biggest boats on the water. That honor went to the sweep boats, trademarks of the Middle Fork, behemoth cargo carriers which, despite magical deftness by their drivers (all other boatmen are guides, or oarsmen, sweep boaters are “drivers”), are much too big for the small shallow Middle Fork during the low water of August. They rumble along nonetheless, abusing the rocks of the riverbed and occasionally coming to a demoralizing halt, beaching in the middle of the stream with trickles of liquid seeping past their unmoving rubber tubes.

Such a scene greeted us as we rounded the bend. A sweep boat sat stuck in the middle of the river, in the one available channel. A trip of five smaller rafts were just behind us, and another sweep boat careened downhill upstream of them. This did not look good.

It was day two of my trip down Idaho’s Middle Fork of the Salmon with ARTA, a non profit river company who donates proceeds to river conservation. They have been around nearly as long as commercial boating has, operating with little fanfare on the most sought rivers of the West. Their back-to-basics style suited me, and a few of my good friends guide for ARTA, so I was thrilled to join their operation for a run down the Middle Fork.

Although the six-day descent was an adventure in its own right, the ARTA trip served as just the first leg of my journey across central Idaho. My goal was to traverse the largest roadless area in the lower forty-eight states—the combined Frank Church-River of No Return and Selway-Bitteroot Wilderness areas. I hatched the plan years ago while guiding on the Main Salmon. Back then, I wanted to walk across the rugged backcountry, venturing deep into no-mans-land. But aging knees and the discovery of pack rafts conspired to steer my desires toward a more leisurely, and frankly, more logical route.

On a map, the Middle Fork of the Salmon and Selway Rivers line up almost perfectly. Both flow due north before taking sharp left turns, carving westward into the mountains. By following the Middle Fork to its left turn at the confluence of the Main Salmon, and then continuing north on foot until reaching the Selway, I could make the wilderness traverse mostly on the backs of Idaho’s iconic rivers. I would run the Middle Fork and the Selway, back to back, with just a few days in between of backcountry suffering on foot, to make me appreciate the river’s ease.

One of the most unique aspects to a Middle Fork trip is the change of environment between put-in and take-out. The trip begins on a small swift mountain creek, busily barreling through forests of lodgepole pine and subalpine fir. Just three days later, the tumbling stream has grown into a medium-sized river, winding beneath towering walls of granite. The mountain lodgepoles are supplanted by majestic ponderosa pines, and dark green pools beg for a swim.

This change in scenery continued throughout my wilderness traverse. After passing the Middle Fork’s arid Impassable Canyon, a transition to moister, richer landscapes commenced. The shift occurs due to several factors—slope aspect, escape from the eastern Idaho rain shadow, and latitude. By the time I emerged from the wilderness in Lowell, Idaho, my surroundings were lush montane forest, a far cry from the high sagebrush valleys near the Middle Fork launch.

One thing that remained a constant along my traverse was the ruggedness of the terrain. The lower canyons of the Middle Fork were an eye opener. Here the river bores into the Idaho Batholith, that granitic mass that offers foundation to the maze of ridges we call the Salmon River Mountains. Along the Middle Fork, the terrain is sheared into a true gorge, where crags form a rim to the river canyon. Different from canyons of the Southwest, however, is the view one gains from that craggy rim. You do not find yourself “out” of the river gorge here, but rather “in” an array of grassy slopes, forested gulches, and rocky ridges. The scope of isolation gained with an hour’s hike away from the river is more than most river travelers can imagine.

On this first leg of my traverse, I was happy enough to stay mostly confined to the water. Anyway, that’s where the action was. As the baggage boatman, Kate Aitcheson, and I pulled ashore so that our ARTA compadres could help with the grounded sweep boat, a private trip pulled into shallows above us, unsure of the unfolding situation. I told them our trip was helping with the stuck boat. The cataraft oarsman nodded, and started bumping downstream past us. But he was now in the left channel, a route that held more rocks than water.

Unable to row effectively in the shallows, he pinballed onward as we watched with pensive, morbid curiosity. The rest of his party, all four boats, followed with tragic devotion. A downstream oar caught rock, catapulting vertically and pulling the boatman from his seat. He let go to watch the oar pitch erect like a twitching flagpole. The raft immediately pinned against the rock-chocked oar. Other boats bounced past the spectacular configuration, sticking on their own rock piles nearby. As worrisome and entertaining as this scene was, our attention was arrested upstream, for there came a giant sweep boat, barreling headlong for the improbable shallows in the middle of the river where the first sweep boat sat immobile.

There was a shout, a collision, a screech. The sweep boats sat in the shallows, anchored beneath the weight of thirty chairs, twenty tents, a full kitchen—stoves, silverware, tables—and a pile of drybags and sleeping pads and everything anybody could want to make their wilderness experience a little less wildernessy. Guides waded into the river to free the beached whales. Shouts emanated from the private pile-up, still unresolved in the smaller left channel.

The traffic jam cleared, eventually, and before long the river was robust enough to let us forget about the low water shenanigans. As the Middle Fork deepened, the rhythms of river life infiltrated our group and we made our way, comfortably but not ostentatiously, down the growing river. The roots to which ARTA still anchors became apparent on the last morning, when our propane supply unexpectedly tapped out. This might have been a full-blown crisis with many companies I’ve run with. It hardly slowed ARTA’s morning routine. Charcoal was started, and everything was cooked old-school style—over fire. It even tasted better.

Following goodbyes and swift load up at the take-out ramp, the reality of my upcoming adventure was suddenly apparent. My friends were driving back to town, to hot meals and cold beers. I was continuing down the river, and into the smoldering mountains, my route and my future uncertain. As I peeled into the current on my own, my fellow boatmen gave a raucous cheer out the window of their departing truck. Their support buoyed me all the way to camp. One half of my traverse was behind me. The next leg—to the Selway—had already begun.