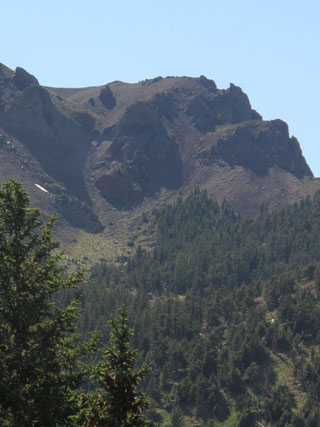 He was the first human I’d seen all day, and he wore a Green Bay Packers jacket. I lauded his team’s world champion status, but football was far from his mind on the lonely trail. “I didn’t know which way to go at the trail split, so I just came this way, man. There’s no trail sign or nothing. I started at the bottom and I, well…” I cut off his frantic rambling with a couple reassuring words, turned him toward the ski lodge, and raced away. A more nurturing person might have accompanied the disoriented Cheesehead back to the trailhead, but I ran from the role of rescue escort, jaded from too many times when it was my job to do just that. Besides, he was having an adventure. Why should I rob him of that?

It was day one of my circumnavigation of the San Francisco Peaks, a pilgrimage long overdue for someone who lives at the foot of the mountain, and who would not live there at all were it not for the mountain. It gives us a nexus to anchor on, a height to gaze upon, slopes to ski on, forests to escape within. It holds beauty and glory and wonder that makes this corner of the world unique. It is a sacred landform. A pilgrimage around the mountain provides anchorage, for me at least.

The Kachina Trail offered easy progress, but a garden of giant boulders lured me away, into a blanket of ferns beneath rippling white barked aspens. Following the path of least resistance—feeling the flow—I merged onto a beaten elk trail that led up and across the moderate south slopes of the mountain. A jumbled field of angular boulders concealed an ancient Douglas fir. It protruded sideways from a half-cave in a twisting mass of corky ribbed bark. I climbed onto the horizontal trunk and sat, twenty feet off the deck amidst a universe of aspen leaves that twinkled in the breeze. Another thirty minutes of walking led to an open slope of massive limber pines that indicated familiar territory. I had floated through fields of fresh snow here, in winter’s past.

Arizona Snowbowl’s Agassiz Lodge was hopping. I was somewhat unprepared to come popping out of the lonely woods and into Friday afternoon on the tourist circuit. Jethro Tull emanated from speakers on the lodge porch. People filed toward the ski lift. Children drew chalk figures on the concrete of the patio. The place buzzed, but my eyes drew away to the lower parking lot. Row upon row of logs—aspen, spruce, fir—lay in the dust, remnants of the ski area expansion. Walking across Hart Prairie, smoke from burning brush piles on the new ski runs wafted beyond a wall of forest, concealed from the sunny chairlift. Santana played a low rhythm there.

I ducked back into the woods, stepping over deadfall en route to a favorite game trail. It magically appeared amidst the matchsticks of fallen trees, leading to a small meadow where I once killed an elk at almost point blank range. It wasn’t pretty. Killing rarely is. I looked for the spot where she fell, where I was finally able to say I’m sorry, and grateful, and pull the trigger with my barrel at the back of her head. To my surprise, a trace of the elk still remained after three winter’s snows. Gone were her bones and hide and organs, recycled into the community of critters that call the mountain home, but the pile of grass that was in her stomach when she died was still there, matted into an oval of rich spongy turf, a small part of the meadow mosaic.

Dark, thick forest of spruce and fir and aspen and a jigsaw of deadfall, thank goodness elk trails ran all through it. I stopped for no apparent reason and peered through avenues of tree trunks to my left. Two russet dark elk started into a short burst at my pause. It was time for me to climb, up away from the zone of bedded wapiti and into the short trees of timberline. I craved water but my next source was who knows where, maybe at a snowfield where I could melt a bowl of winter’s leftovers. Throat burning, I plodded toward beckoning blue sky just beyond the treetops. Finally, came the ridge. 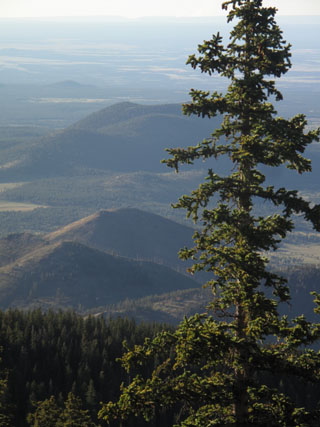 It was an intriguing place; flat and thirty feet wide covered in a park-like grove of bristlecone pines, open and stately like an English wood. At an opening, I lowered my pack, leaned against an ancient weather-smoothed log, and breathed in the view. Low blue hills streaked with green slopes led westward to a far flat horizon. The rim of Grand Canyon nudged above a plain in the north, and to the east, the Painted Desert shone in swirls of brown and pink. I watched until it all slowly swallowed into dusk, and then burrowed into my bag as the desert exhaled through the night, gusting across the treetops at 10,990 feet above sea level.

At just over 11,300 feet, a patch of snow was tucked into the shade of boulders. I melted two pots and drank a third before starting off again. The summit was above me, calling, but there were voices there. I backed off. On this day I was honoring the mountain, and its crown seemed too private a place for me to penetrate. Down and up again, I crested the rim of the spent volcano, still a thousand feet below the miniature forms that scurried about on the top of the mountain. The rim undulated and I followed its crest, beneath spruce boughs and over craggy lichen covered cliffs to a final high point. There, a notebook rested in a jar under a can beneath a rock. Familiar names in the summit register, locals mostly, but nobody had recorded their presence this year, yet.

Down into the heart of the mountain I slid and skidded and skipped and swung, from aspen branch to pumice pile, grateful that I only carried a dozen pounds on my back or I’d have been on my butt more than just once. The slope eased into a stunted forest of Douglas fir, struggling to thrive from soils that still held close to their fiery eruptive origins. A pile of bear scat caught my attention, still soft. I walked carefully and quietly, avoiding the snapping of twigs in the hopes that I might meet the bruin.

Intersecting an abandoned dirt road, bear encounters slipped from my mind as I marched along at a clip, head down, lost in reverie. And then something made me stop. I looked to my left where a black shape lurked one hundred yards into the forest. I squinted. Stump bear, I thought, but I watched nonetheless. Movement. It was a two-hundred-pound black bear, rooting about, as bears do—snouting under rocks, pawing over dead logs, grubbing. I tip toed closer and stood skinny behind a tree trunk, like Elmer Fudd. I took my photos, and then tip toed back to the road as the bear plowed deeper into obscuring brush. 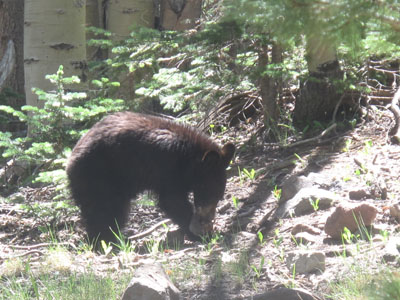 The inner basin of the mountain held just one gap through its encircling rim, and that was Doyle Saddle. I had camped there twenty-some years ago, and once shared a cigar on its flat while watching the first flakes of autumn sweep over the mountain. Now I sat in probably the same spot, grinding slowly on a Milky Way. When I opened my eyes from the sugary bliss, a distant tree trunk burst into view. The sun angle caught it just so, highlighting a rich dark trunk that dwarfed all others around it.

Scrambling around spiny gooseberry bushes and slipping over loose scree, I side-hilled to the giant, losing it and then finding it again, unmistakably. It was a bristlecone pine, burled and arching and likely a thousand years young. I sat next to the elder, marveling at its stout sculpted arms, and trying to absorb some of its slow life pace. 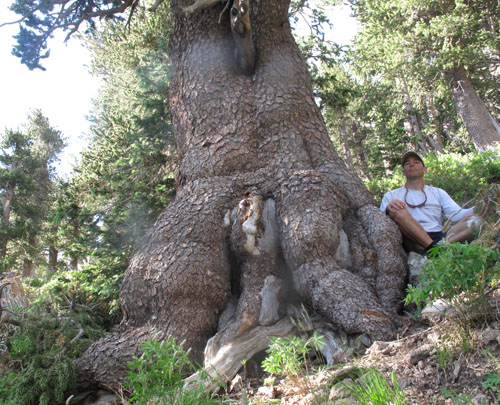 The sun was sinking. I shuffled on, down the trail well behind the last of the day hikers into dark spruce alleys. Plunging off the trail, a meadow opened before me, deep green and lined with lanky aspens and manicured-looking corkbark firs. Time for fire, food, sleep, but the stars vanished and scattered raindrops fell, forcing me to crawl beneath the canopy of a fir tree. I lay in the dark, cradled by the mountain. In the morning I would amble back to the car and return to town, the neighborhood, my house, where I can sleep in peace with the knowledge that the mountain is there still, solid. 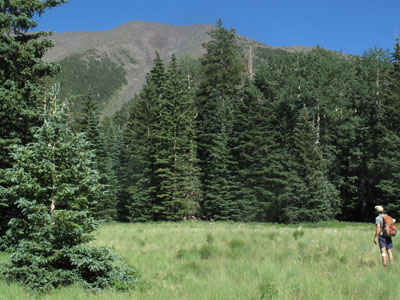