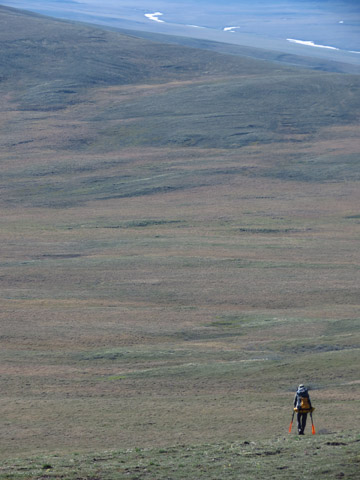 A welcome river breeze cooled us as we drifted and spun in lazy circles down the swift Kukpowruk. By 2 pm we pulled in at the clear Sooner River confluence, having made over twenty miles in just four hours. Just like that, we were back on schedule. With an odd mix of reluctance and anticipation, I packed up my raft and re-tooled for hiking mode. This was the start of our link route between the Kukpowruk and the Ipewik, the crux of the trip. 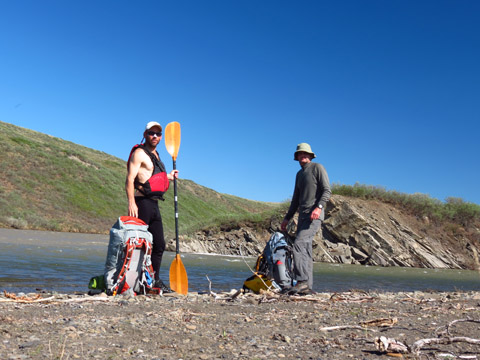 Climbing a gentle ridge, the green snow-dotted Arctic expanse opened around us. Peaks of the Brooks Range rose far to the south. Northward, flat topped mesas hemmed massive valleys. It could’ve been the Colorado Plateau, but it was all green, and there were bugs. 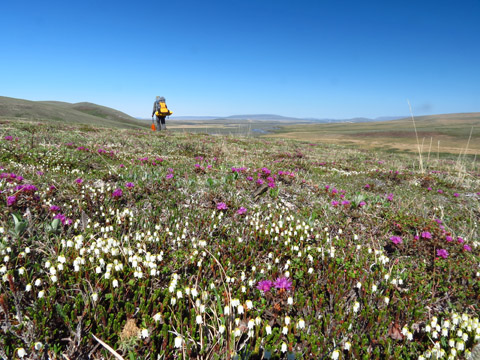 The mosquitos really didn’t get a foothold until we stopped to watch, and wait, for two bears. They spotted us from a half-mile away, and started trotting in our direction. Govi and I dropped our packs as the bears disappeared in a gulch a quarter-mile distant, and enough time went by to make us think they’d veered away. We were thinking of continuing our hike when they re-appeared—too damn close in my binoculars—at 200 yards. 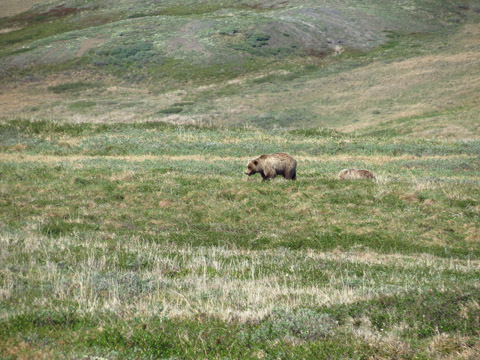 The yearling made me chuckle as it shook and romped. The mama bear zig-zagged toward us, slowly approaching at an angle. For an instant, her head dropped and she came straight at us. I said to Govi, who carried the shotgun, “get ready to fire a warning shot.” But then she swerved off again, the youngster wheeling about cluelessly. Mama bear stood and sniffed. I held up my arms and called, “hey bear.” They paced and grunted, eighty yards now. For a dozen seconds everyone—bears and humans—seemed to be wondering what would happen next, nobody really in control of their own destiny. I moved to my pack and back, trying to help her figure us out. They started to angle away, then trotted over the ridge. We breathed a sigh and discussed our next move, as the bears were now directly in our route of travel.

They re-appeared a half-mile above us, sat down, and started watching. It was a stand-off, both parties waiting for the other to leave. After several minutes, we shouldered our packs for a new route around the opposite side of the mountain. The mosquitos followed us in swarms. At a breezy edge that provided some relief from the bugs, we glassed the next valley carefully, finally deciding that the two bright spots in the distance were grass hummock, and not our bears. Into the evening, we strode across the vast grassy landscape. 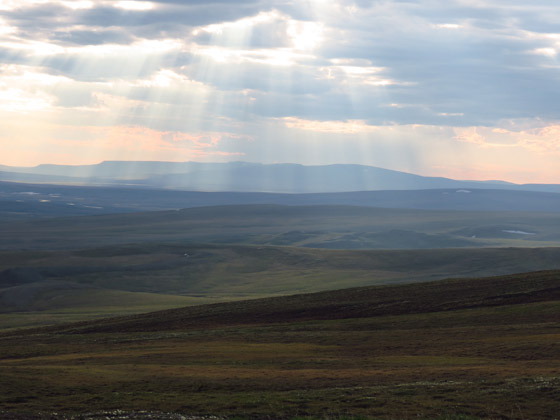 At 8 pm, a flat of exposed dirt offered an opportunity to bug-proof our floorless tent. We spent the next half-hour digging a trench in the hard-pack so we could bury the tent edges. As we dug in a relentless searing sun, skeeters buzzing around our heads, Govi said, “strangely enough, I’m enjoying this.” Miserable as it was, I couldn’t disagree. This was the biggest country I’d ever seen. Long open valleys were flanked by sharp edged mesas and dome shaped hills rising a thousand feet above the plain. To the north, a flatness in the far distance indicated the Arctic Ocean. Westward, mountains faded into the horizon. 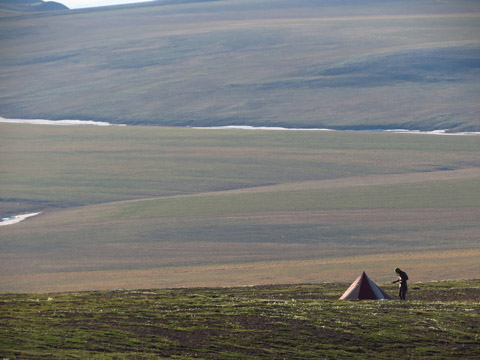 When Govi crawled into the bug-sealed tent at 11 pm, the sun still beamed relentlessly. I asked him how it was in there and he replied, “sort of like a sauna.” It was at least 95 degrees inside. We both lay on our backs totally naked, dripping with sweat.