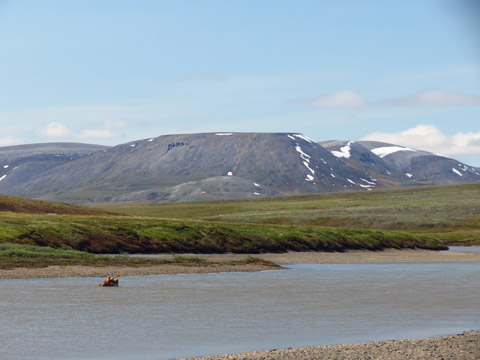 COLD! Thirty-five degrees and fog doesn’t really motivate one to go paddling. It took warm cups of coffee inside the tent to spur us into action above the Nilik River, a major tributary of the Ipewik. By the time we got to the confluence, low overcast had broken into a cheery blue. The Nilik nearly doubled the flow. That extra water was appreciated since the Ipewik had dropped significantly following the flood. 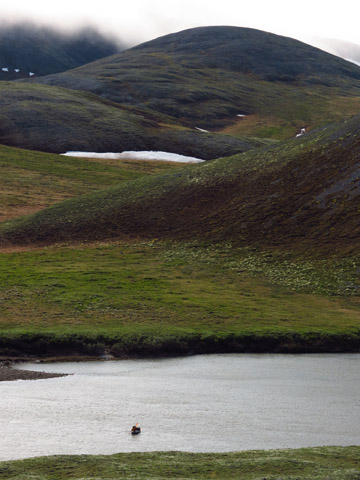 The Lisburne Hills, grey and snow painted and taller than anything in days, poised on the horizon as our goal. A tail breeze provided welcome respite from the incessant paddling in our slow little boats, allowing us time for a hike at the edge of the mountains. From a ridge in the Hills, the scene was empty and vast, revealing the Arctic Ocean marine layer advancing from the northeast, wisping over hilltops like a grey smoke. 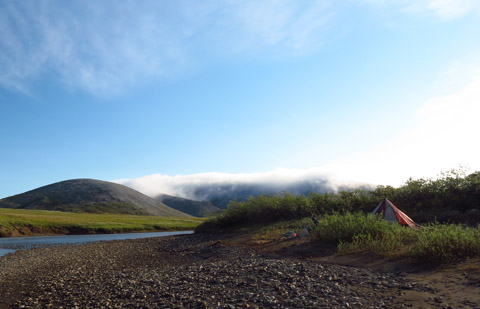 Ushered downstream with the polar wind at our backs, we passed a scraggly fox. It watched us, motionless, with a vacant axe-murderer stare. Perhaps this was one of the rabid foxes the region is known to harbor? Around the bend, a sheltered camp appeared, where only swirling whiffs of wind found their way ashore from the biting gale that sluiced down the river. Upon mountain tops to our east, the Arctic fog knocked at the door. 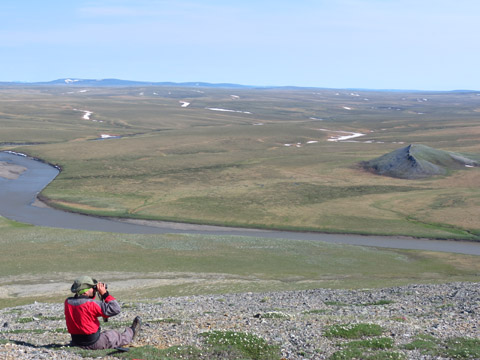 The northeast wind escorted us downstream past orange lichened cliffs, through a couple small class II rapids, and out of the Lisburne Hills to the Kukpuk River. This was the site of an abandoned village called “Kayak.” For us kayakers, a stop was mandatory. As the river carried us farther from the Hills, the wind died, and fish camps sat empty along the banks, the first sign of civilization in almost two weeks. It felt as if this journey was coming to a close. Just then, a grizzly bear ambled along the skyline downstream. Govi and I looked at one another and conjured a line from one of our favorite movies, Deliverance. “We’re not outta this.” 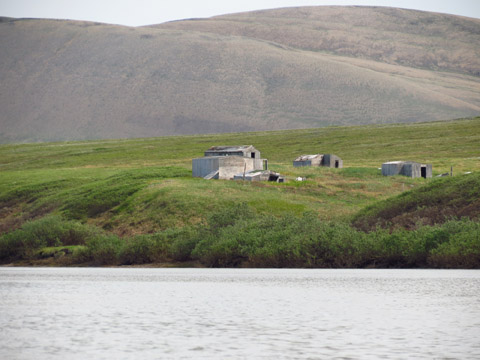