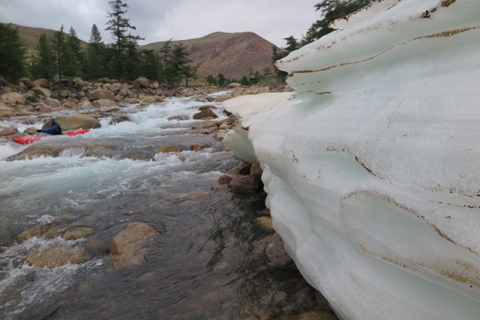 This blob brought to you be Funhog Press and MRA

Not every day in Mongolia is pleasant, but they are almost always interesting. As Pat and I started across the grassland with our boats in tow, it struck me that Jagaa’s departure in the jeep came somewhat hastily. But at the moment it seemed there were more important issues at hand, like finding a route to the water. 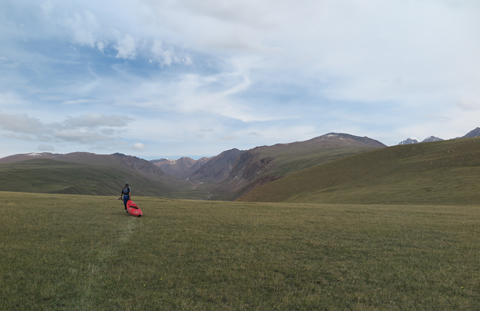 Off the edge and down fields of wildflowers, we emerged from thick stands of larch onto a moraine field of round granite with a clear mountain stream coursing through. This was the Khagartin (Ha gar teen). Our descent would not be the first, that honor went to the British Universities Expedition several years ago. Still, this was probably the hardest whitewater in Mongolia. 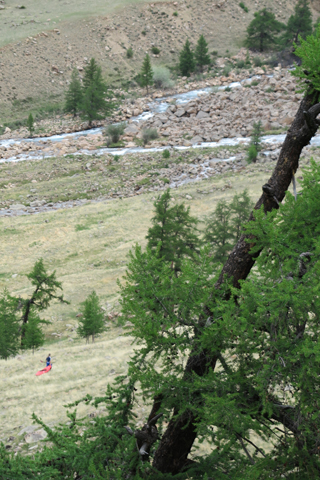 The river was fast and shallow. After berating myself for portaging a rapid that was all clean, I came to see my decision in a better light after watching Pat narrowly pry himself off a boulder. I did the same a couple rapids later. The riverbed was young, and unexpected rocks lurked in every channel. 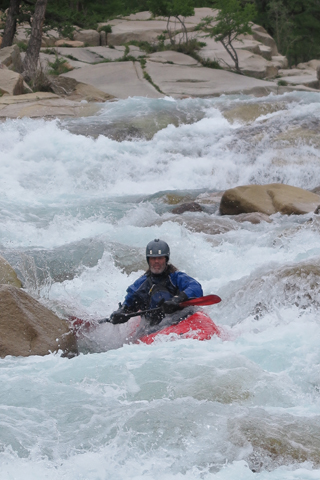 At a scout, we agreed the move was to split the boulders. I was too aggressive, and stalled on the pillow, sluicing backwards into a submerged rock that flipped me. Trying to roll in the shallows, all motion stopped when bedrock pressed against my back and the kayak pushed down from above, flattening me forward onto my front deck. It wasn’t overwhelming force, but the seriousness of the situation was apparent, and I resolved to swim out at the next opportunity. Seconds later my chance came, and I surfaced standing chest deep in a marginal eddy. “Paddle!” I yelled as Pat swept by. It wasn’t encouragement, it was an alert to locate my missing blade. He chased it down, and javelin-threw to shore. From opposite ends of a gorge corridor, we exchanged the all-okay signal. 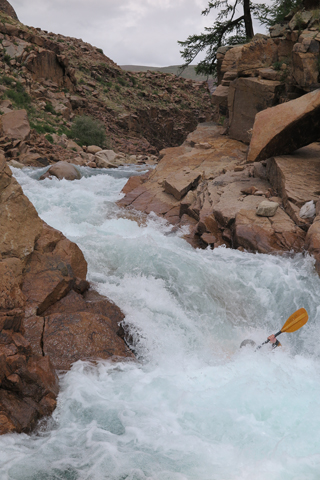 A bedrock sluice, an up-and-over portage, and more paddling brought the Footbridge Gorge. We’d seen a picture of this on Google Earth from back in Flagstaff. The glimpse of whitewater in that photo led us here. Now reaching the long sought location, there was more whitewater than we’d ever imagined. 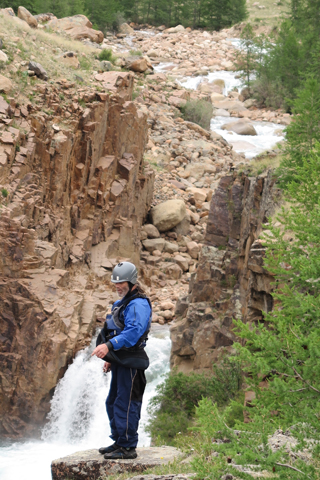 Another mile led to the Ireg River, below which we floated on a luxurious 400 cfs through a scenic class IV canyon. Emerging into an open valley, we scanned for Jagaa and the waiting jeep. We saw neither. I reached for theories, “Maybe we’re late and he’s off looking for us.” Pat was more resolved for a long wait. “There’s a spring downstream where we can get water, and those larch trees will provide firewood.” Two hours later we sipped fresh water by the fire. The sky was cloudy. A gentle breeze wafted upstream. 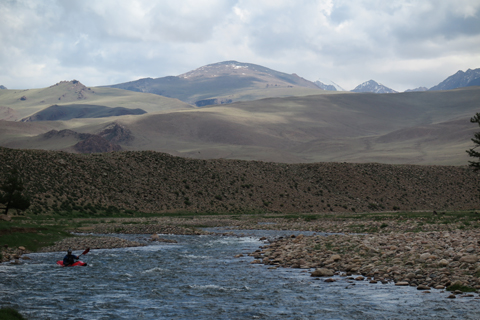 Around midnight, I put on my drysuit, arranged my pfd as a pillow, and announced to Pat wishfully, “I’m crawling in.” To deter the occasional mosquito, I draped my sprayskirt over my head. In a half-sleep haze, I could feel the chill of night on my back overpower the warmth of the fire at my belly. When this happened, I’d sit up and place more wood on the smoldering coals, then watch as it smoked into a release of beautiful orange flame. 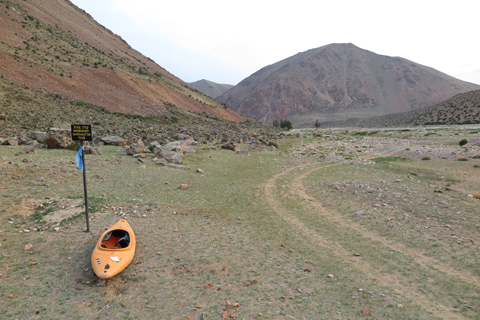