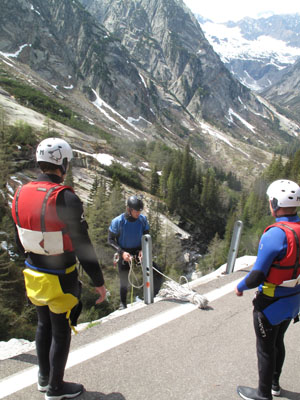 I was a bit uneasy clipping into a rope with no belay device, but it had worked for the two guys in front of me, so I took one last look at the bolted anchor, sent a trusting glance to Ian, the guide, and let him lower me off the edge.

This was my first taste of canyoneering, or “canyoning” as they succinctly say, in Europe. Of course I’d have been lowering myself, much to my satisfaction, if it weren’t a guided trip, but surrendering to the established program was a part of the exercise. I wanted to see how they do it in the Alps, birthplace of nearly every alpine sport, including this one. Thanks to my friend Riaan at Outdoor Interlaken, I got a first hand glimpse.

The gorge was granite, not too different than some of the southern Arizona gorges I describe in Canyoneering Arizona. Being in the Alps, however, the Grimsel Gorge was a whole different flavor. One of our first mandatory jumps came at a greasy smooth 15-footer. While I downclimbed to make an awkward 8-foot leap, the rest of the gang scrambled up to a stone and concrete jumping platform above for a 25-footer! I think they got their money’s worth on this one. 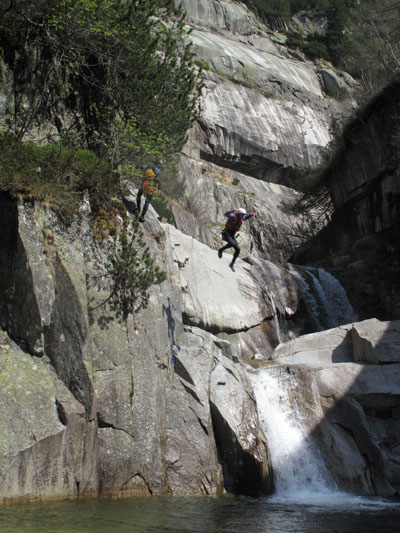 At the next drop, a fixed line protected a slippery traverse, and iron bars aided the downclimb. I was starting to get the idea. In a land of James Bond sky trams and paragliding landing zones in the middle of downtown, there’s no reason one shouldn’t expect to see the canyons fully developed for adventure recreation too, and this one was.

At the crux, a 15-foot waterfall was pinched in lovely sheer walled narrows. Back home, it would’ve been a webbing anchor through a pinch point, and a slimy short rappel into a swim. As I sized up the scene, however, it was apparent that an Alp style descent was in store. “Hold on here, and let go when I shout,” were my instructions. And I was off, zinging down a cable zip line over the middle of a pool before letting go, and dropping like a stone into the depths. It was hardly the measured progress amidst wilderness isolation that I find in the canyons of the American Southwest, but I have to admit, it was one hell of a lot of fun. 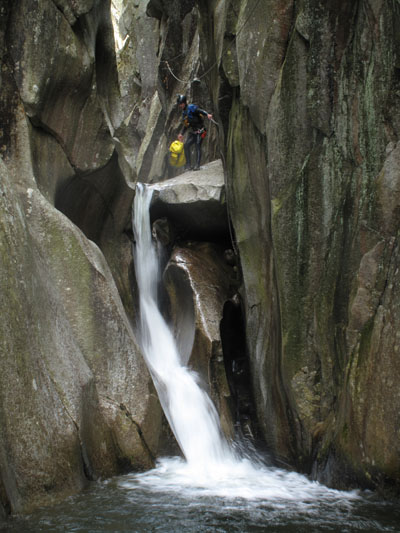