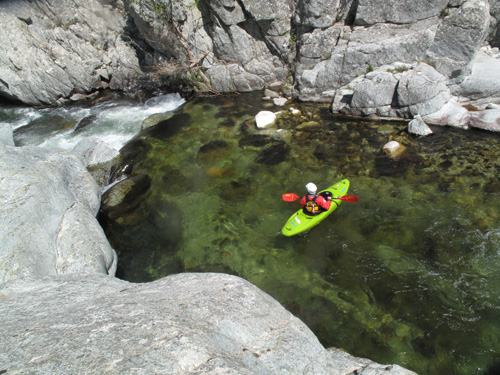 As I blissfully paddled past the portage eddy, a chorus of warning shouts called after me in several languages; German, French, English. I didn’t understand many of the words, but I got the point—eddy out dude! The unrunnable falls were just ahead, and I was apparently headed for certain doom. I pulled ashore quickly and climbed onto smooth grey granite, much to the relief of my impromptu international safety committee. Kayaking, it seems, is an international language, and nowhere was the camaraderie more apparent than at Kayak Session magazine’s Corsica Festival, 2011. 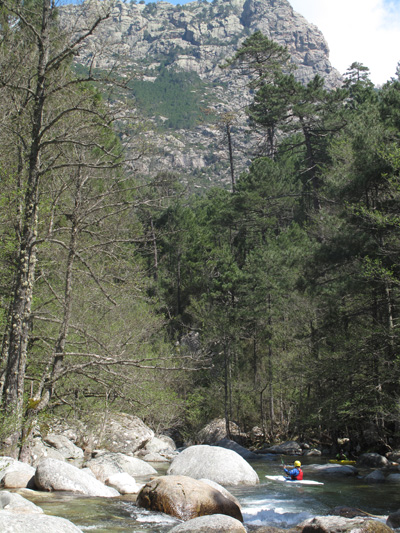 Creek-boat laden vehicles rolled in over the weekend, turning the quiet Ernella Campground into a bustling menagerie of paddlers’ camps that sprawled across grassy fields beside the crystal clear Tavignano River. According to my unofficial survey, kayakers checked in from the U.K., France, Germany, Switzerland, Austria, Slovenia, Italy, and the U.S.A. Evenings were noticeably quiet early in the week as paddlers returned slightly battered from low water descents. Still, boaters have been flocking to classics like the Fium Orbu and Travo, where bedrock slides provide good fun even at 80 cfs! And the sunny Corsican landscape—filled with vineyards and quaint villages beneath snowy peaks—was a joy to experience in any case, low water or not.

Several of whitewater’s keystones made a point to stop by the mountain isle. Horst Fursatel of the hf brand attended, global paddler Arnd Schaeftlein and his Teva van were camped out accommodating paddling missions all week, and the human Corsica guidebook Raphael Thiebaut patiently answered everyone’s questions as to where the highest water might flow. Snowboard champion-turned-kayak pro Ron Fischer came in straight from Chile, and Frenchman Stephane Pion paddled each day before showing the latest paddling films each night.

Full-time paddlers and weekend warriors alike enjoyed the scene, low water or not. Perfect water levels are only a bonus to this perfect Corsican setting. 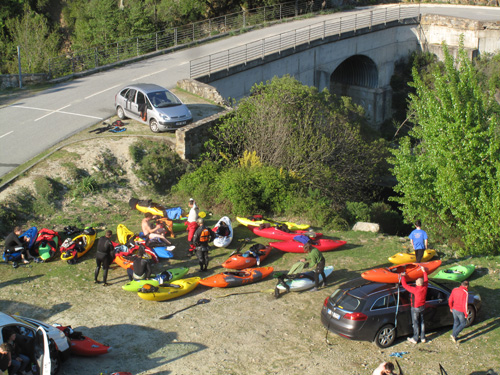