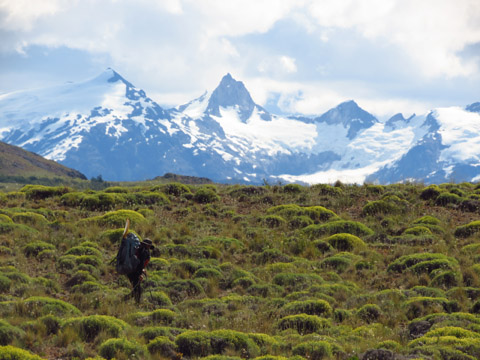 This blob brought to you by Funhog Press.

Before going to Chile, the Chacabuco was an alternate river for us, something that might be worthwhile if we had extra time to kill. Turns out, it’s a jewel, maybe the highlight of our trip. The Chacabuco Valley is slated to become a reserve, titled quite ambitiously, “Patagonia National Park.” As we bounced down a dirt road trailing a lonely cloud of dust, it was soon apparent that the lofty title is not overblown. 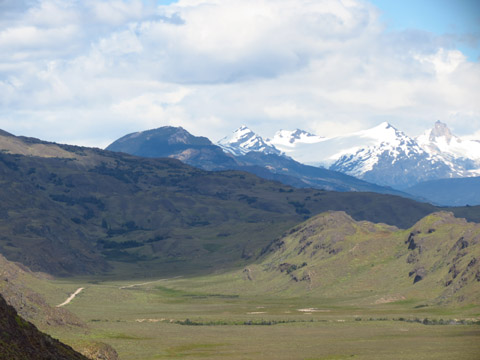 The Chacabuco is in the lee of the Northern Patagonia Ice Cap, and thus more arid than the glacial fringed valleys just to the west. It is an open landscape, painted yellow by the flowers of thorny buckwheat. Herds of Guanacos stood curiously with long outstretched necks as we passed. White and black birds that looked like miniature albatrosses flocked over marshy lakes. Ahead, I saw a big bird gliding. I’d never seen an Andean condor before, but it was easily recognizable by its slow coasting flight, just like the lumbering California condors that circle over Grand Canyon back home. Soon after spotting this first one, we came into a large gathering, maybe thirty, that pendulously flapped away at our approach. 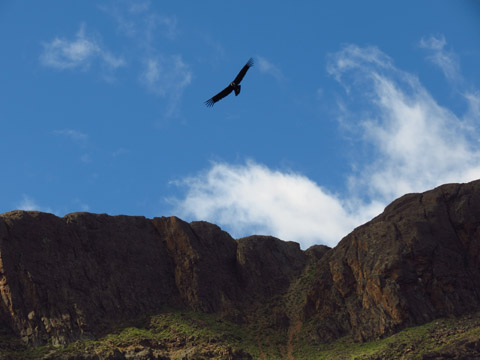 Stopping at the isolated offices of Conservation Patagonica, we followed Roberto inside and procured updated information on road conditions. By the time we reached Casas Grandes, our put-in, we had climbed past the lumpy moraine hills of the lower valley and entered a dry Andean scene where a finger of Argentina’s Pampas crawls into Chilean territory. 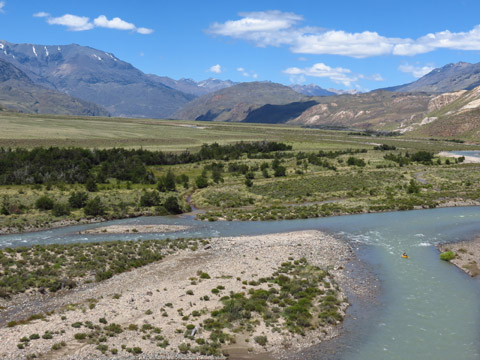 Two hours of floating brought us to the first gorge. This one started abruptly, like all the Chacabuco gorges, where glacial moraines cross the river’s course. The second rapid in the gorge was an S-turn around holes that could easily flip a pack raft. Lisa thought it might be time to pack up and portage. I ascertained that it was easy enough, and we should stay with the river. She acquiesced. We ran. I swam. 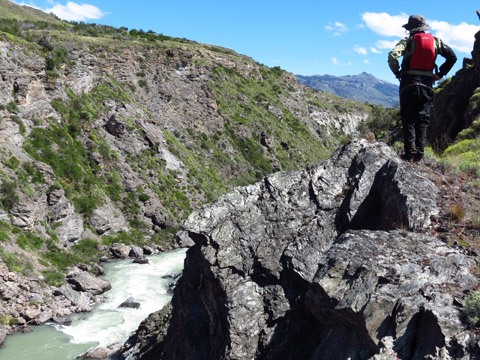 In my drysuit, cold wasn’t an issue, but it was still good that I made an eddy before the next rapid. The rocks were sharp and irregular, forcing us to de-rig the boats and walk. A half-hour later, we were drifting out of the canyon bound for a ridgetop camp among gnarled mossy nirre trees. 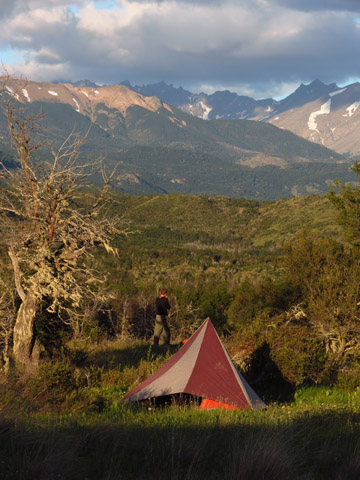 Had we known what awaited us on our last day, we’d have hardly rigged our boats in the morning. Instead, we pushed into the last major gorge ready to run, and stay with the river. We scouted, and then ran the first two rapids before arriving at a spray filled horizon. This one was a walk. Immediately below was another portage, and the next drop forced us onto a steep scree slope. 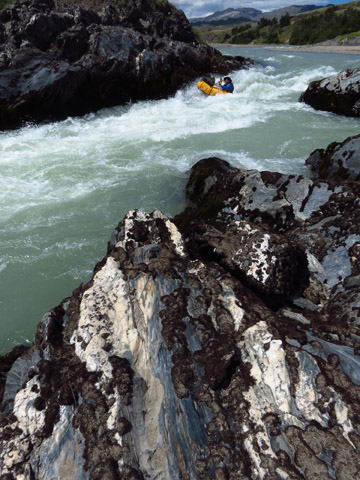 Lisa climbed a bluff and hauled her pack up on a rope. Pebbles cluttered down, and a cloud of dust mushroomed. When I climbed up to join her, she said, “The bad news is that it keeps going.” Downstream, long technical rapids too big for a pack raft continued. The portaging looked difficult and slow. We were hiking out. 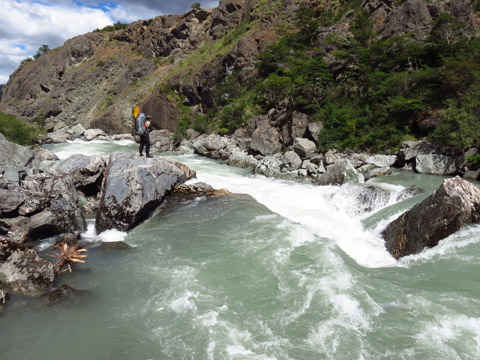 I spotted a route leading downstream and out through a break in the rimrock, but Lisa had other ideas. She plunged ahead toward a low cliff on the rim. I offered my dubious opinion of her plan, but she had a vision and simply replied, “I’ll lead it.” In her drysuit, she started up a vertical bluff of compacted dirt and crumbling moraine, pausing at the crux before finding a solid foot placement and a bush for a hand hold. Thirty minutes later everything was out of the canyon. 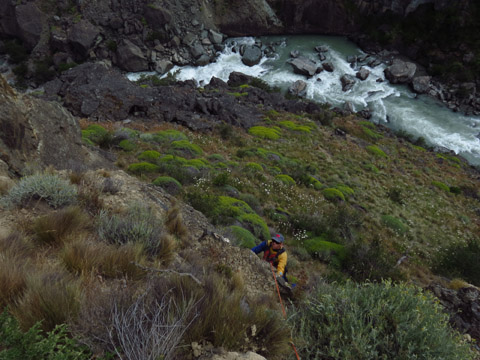 At 40,000 cfs, the Baker dwarfed the modest Chacabuco. It swirled and surged at the confluence, pulsing with the energy of the canyon. A few miles downstream we took out and hitched a ride to Cochrane. It was time to trade our pack rafts for sea kayaks, and continue the descent of the much anticipated Rio Baker. 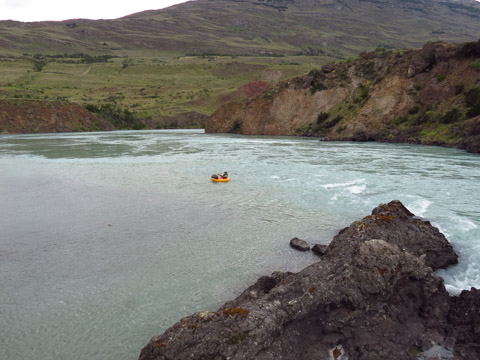