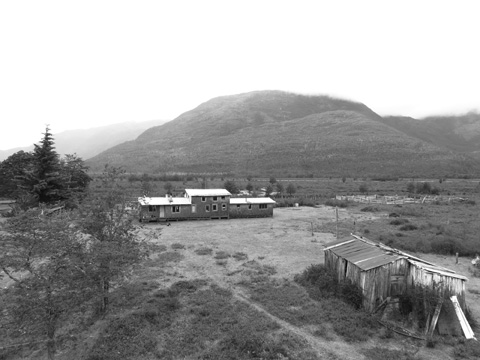 Dark clouds stormed the harbor, and a stiff cold wind rattled metal roofs. Lisa put on wet clothes that had not dried overnight because the stove faltered due to wet wood. We hefted our packs and climbed the boardwalk steps to the road-end rotunda shelter, perched at the windiest spot in town. Weston was due to arrive at 7:30. At 7:40, we got out sleeping bags and draped them over us. Fresh snow was visible on the mountains above town, behind scudding clouds. Sitting there freezing, my opinion of Tortel changed from—idyllic village untrammeled by the big busy world—to—desperate end of the road place without opportunity or much to do. It was a mountain and sea bound prison, and we wanted out. 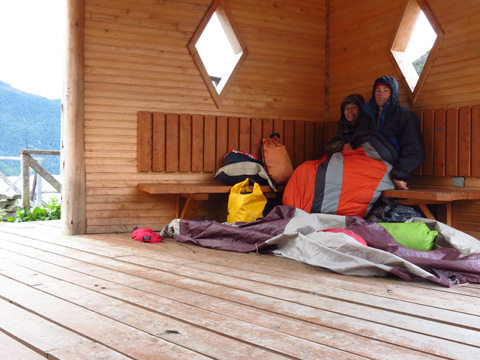 Weston arrived at 11 am (turns out there is no gas available in Patagonia on New Years Day), at which time I was off attempting to log onto email at the Tortel public library, to no avail. When I returned, everyone was in a big rush. The ferry at Puerto Yungay was leaving in 41 minutes, and it was a 45 minute drive away. We raced down the lonely Carretera Austral and curved over a pass, waterfalls magically gushing forth at every new bend. It began to sleet. Weston locked up the brakes at a gravel corner, producing a small collision with a cliff, but we carried on. When the clock struck 12:00—the ferry hour—we could see water a mile ahead. Rounding the final corner for the moment of truth, we could see the ferry boat. It was a quarter-mile from shore, motoring away. 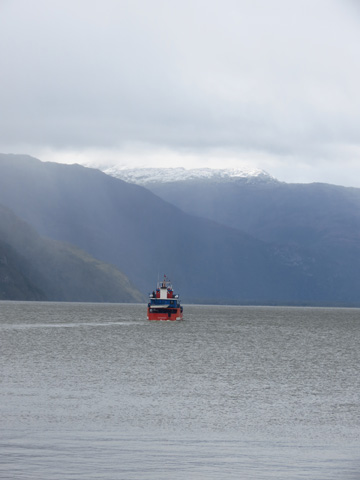 Our six-hour wait passed without much suffering. There were hot empanadas at the ferry cafe, and the dock gradually collected an eclectic mix of travelers; cyclists from the Netherlands, Chilenos going to see family, fly fisherman, and a Brazillian couple who were on a 1,000-day road trip across North and South America. We were the only paddlers there, but varied enough in our own right: Roberto—the Chilean teacher/adventurer, Weston—the Colorado/Patagonia filmmaker, Diana—the college senior/journalist, Lisa, and me. 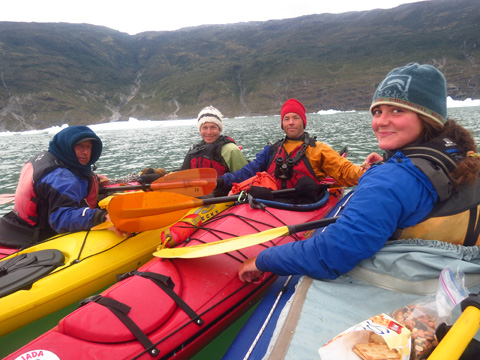 At the far end of the ferry crossing, we piled into Weston’s truck and turned down the Quetru Valley toward the Pascua River. The scenery was immediately reminiscent of Alaska. Boggy muskeg valleys linked lakes beneath mostly barren broad mountains. A pick-up truck with a partially shattered windshield approached from the other direction. Inside were a man, woman, and child. This was the clan of Hernan Guelet, settler of the Quetru. 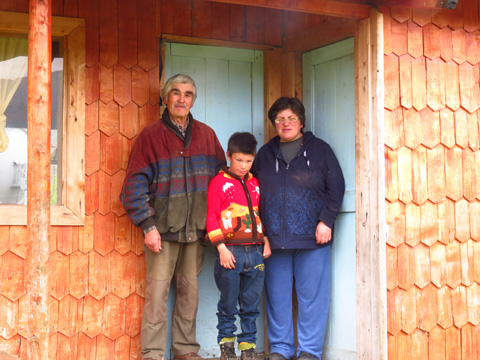 In 1968, Hernan was a teenager living in isolated Tortel, Chile, when he read a military explorer’s report on the Quetru Valley. At nineteen, Hernan set off with a friend to locate his Shangri-La, rowing a 16-foot wooden boat across seldom traveled wind-ripped sea channels. For a map, they had a hand-drawn copy of a government survey. When they reached the Pascua River mouth, they rowed upstream for four days. As the river climbed into a gorge, and a valley opened to the north, Hernan knew he had arrived at his new home. He made that same journey many times over the next three decades before the route to civilization changed at the turn of this century. A road was plowed to within twenty miles of the homestead, and the Guelet family could ride horseback to the road, and the ferry. In 2006, a new gravel track was made, leading directly past Hernan’s house. This was the road we arrived on, to play soccer with 6-year-old Julio, and listen to stories of the frontier over endless rounds of matte.