We had no intention of setting a record on Oak Creek. And it’s not the type of title we want to repeat, either—longest shuttle ever. The much-anticipated storm over Presidents Day weekend brought the creek up, and the roads down. Highway 89A, our standard twenty-minute access to the creek, was closed and gated, prompting the more logical among us to shelve paddling plans for the day and go skiing, bake cookies, sit by the fire. But we had boats loaded and the storm seemed to be clearing, so onward we went, to the crowded Interstate 17 for a roundabout drive to the creek. 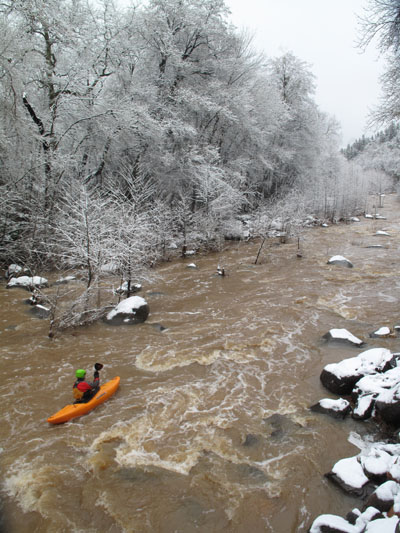 The river was fantastic, a bit lower than optimum but more scenic than usual. Trees along the creek were snow-covered in a lacy white dust, and red rock monuments of the canyon soared snow-draped through a misty atmosphere. Despite occasional squalls I remained toasty warm in my Kokatat drysuit. Take-out came too soon.

Sun dappled pillars and breaks of blue made it difficult to believe that the storm was still raging along the rim, but the canyon highway remained closed. So too, we soon learned, was the interstate. The proverbial jack-knifed semi-truck was apparently the culprit, prompting two-hundred cars to park patiently at the freeway on-ramp, the line growing by the second.

Thank goodness for back roads. We bounced across the Verde Valley on a familiar dirt byway, enjoying the stormy scenery but heading steadily opposite our destination, for the moment. Driving up the Mogollon Rim, the snow returned. Trailing a cloud of white dust, we passed just one other truck in our second hour, and were on pace to get home by dark until reaching the scene of a plow being extricated from the deep.

Finally turning onto lighted streets near home, a familiar pick-up with boats in the back appeared in the headlights. It was John and Josh, the other paddling party that had run the creek. Apparently they had endured the wait at the freeway—different tactics, same results. We burned more gas, sure, but hey, we got the record!