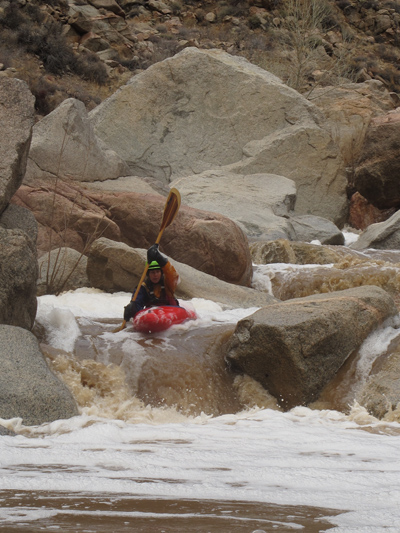 The sun peeked below storm clouds, illuminating the desert in golden light. A rainbow arched over a projecting volcanic peak. It was all very auspicious, driving toward the long awaited first descent of Trout Creek. John Govi was at the wheel. Pat Phillips, twelve weeks out of shoulder surgery, rode in the shuttler’s seat. Lisa and I sat in back scrutinizing—me on the map, Lisa on the GPS.

The road was getting rougher and dusk was creeping upon us when a crashing sound indicated colorful kayaks bouncing past the passenger windows. Hardly an unusual occurrence, on a road like this, but when we stepped outside to investigate, it was discovered that our tie-down was adequate. It was the racks themselves that had jumped ship.

Theories abounded. Shims were improvised. Boats were re-loaded. Darkness arrived. The road worsened. We were halfway up a gooey slick hill when the load failed a second time. We fixed it, again, and added more lines, and cracked open beers. Spirits were improving by the time we pulled into a drizzling camp. And then Lisa announced that she couldn’t find her gear bag. Doubts about the mission began to enter my psyche. 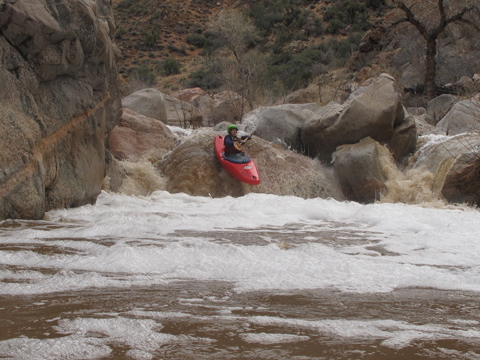 Ask any Arizona outdoorsman to find Trout Creek on a map, and you’re likely to get a blank stare. Despite being one of the top ten largest drainage basins in the state, nobody knows of this place. Its canyon hides among overlayed peaks of the lonely Aquarius Mountains. Its water dives into the sand before reaching the Big Sandy River along Highway 93. There is no gage for it on the Internet. Its upper reaches lie behind locked gates, a vestige of Spanish land grants negotiated during the acquisition of the American Southwest from Mexico. Trout Creek drains the heart of Arizona’s forgotten quarter.

My interest in the place spawned after noticing a lens of granite boulders along Interstate 40. If there were a creek to run through that same lens of boulders, I surmised, there might be some interesting scenery, perhaps a nice swimming hole, maybe even a dramatic gorge. The map confirmed that if such a creek existed, it was Trout Creek. My first attempts at reaching the clandestine waterway ended in frustrating drives down long dusty roads ending at locked gates. Deeming vehicle access futile, I shared my fascination with one of Arizona’s most accomplished adventurers, Glenn Rink. Glenn pioneered climbing routes in Monument Valley and elsewhere, is an elite among Grand Canyon explorers, and has traveled more of Arizona’s backcountry than most men from this era, or any other. He of course knew of Trout Creek, from the map at least, and promptly suggested a through hike down the length of the drainage. With Mathieu Brown and Ally Martinez, Glenn and I started walking down a barely discernible dry creekbed in the junipers. Four days later, we had covered fifty-some miles down the length of Trout Creek.

Always keen on kayaking potential, I watched closely during our trek, noting that the first three days along Trout Creek were pleasant hiking but too brushy for paddling, with little in the way of rapids. In its last 15 mile canyon, however, Trout Creek enters granite. Smooth boulders, pool-drop gradient, minimal brush, a scenic canyon, this was bound to be a quality kayak run. Now all I had to do was find a road into the head of the gorge, and wait for water. It was eight years before I found both. 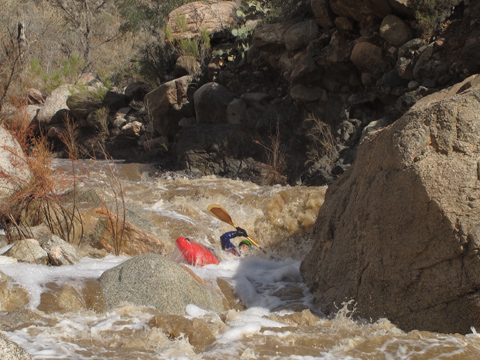 The mystery of the missing gear was solved as we nursed a moist campfire. Hadn’t she pulled it out to find a shim at the first rack failure? Our minds were at ease for the moment, but Lisa’s helmet and drysuit were still sitting roadside, way back there, over the muddy pass and down the rocky hill and past the tricky fork. We weren’t driving back tonight.

I snuggled beneath a rain pattered tent while whispers of discussion came from Govi and Lisa over pre-dawn coffee. He was coming down with a cold. Lisa was helmet-less. Trout Creek was dropping. “I’ve made my decision,” Govi reported at dawn. “Lisa is going to take my helmet and go paddling, and I’m going to drive back with Pat. It’s like mountaineering,” said the seasoned ice and rock climber, “as long as someone gets to the summit, or down the river, it’s a success.”

Another 45 minutes of four-wheel-driving brought us to the creek. It was split into two channels, gurgling brown between willows. The water was at that dreaded “tweener level,” somewhere between obviously too low and just right. Regardless, the decision on this day was easy. After a long dicey shuttle drive and years of planning, I wasn’t about to turn away.

At the first small rapid, Lisa and I pivoted around subsurface rocks before finding a clean chute leading into a deep pool. Looking at one another with resigned expressions, our minds fixed on an identical thought, “This water level feels a lot like Corsica.” We visited the Kayak Session Corsica Festival a few years ago, discovering that kayaking can be fun even on flows under 100 cubic feet per second, if the riverbed is clean enough. Trout Creek felt more like 200 cfs, so we counted our blessings. 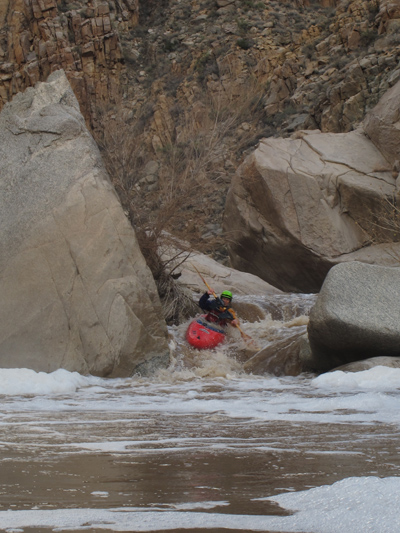 The first significant rapid brought a portage, but only because we weren’t yet in attack mode. A half-hour later our rhythm was established as we made quick scouts and decisive runs through the steepest part of the river, a quarter-mile stairstep that drops over 200-feet per mile. It was a relief to know the crux was behind us, but there was no time to relax. Sixteen miles on 200 cfs is a long day any way you slice it, and the short days of winter have no sympathy for the kayaker’s dilemma. We stopped for a snack and a map check two-hours into the run: Five miles down, eleven to go.

Although the first six miles of Trout Creek held the highest gradient, steep rapids continued throughout the run. Every half-mile of mellow time saving water was inevitably punctuated with a horizon line. Fortunately, the low water allowed daring probes into mid-rapid eddies, from which we could usually boat-scout the remaining rapid below. Sometimes the leader would have to quickly jump out for a better view, signalling the line to paddler number two. This time saving technique can have its hazards, of course.

At a Z-shaped rapid I hopped out midway and motioned for Lisa to catch an eddy near me. She came down and we discussed the rapid together, me from my perch, her from her boat. “Looks good. Boof left,” we agreed. “The approach might be tricky. I’m gonna start from the left,” I added. But Lisa was already on the right. “I’m going to go from here,” she proclaimed. “I’ll watch,” I said. Lacking enough space to fix her angle, the boat nose climbed a semi-dry boulder at the lip, and the current instantly grabbed the stern, sending her over the falls in a backward end to end flip. There was no terrible sound of plastic on rock, but I began my pursuit of the situation nonetheless. My chase was cut short by the welcome smile of my companion, smirking an all-okay signal from the safety of an eddy below. “It’s deep,” she shouted.

More water would make rapids like this one softer, wider, better. The 200 cfs of our run was fine for a first descent, but 400 cfs would likely be optimal. The hardest rapids would probably get extra stout as levels approach 1,000 cfs, but the majority of the run could handle those higher flows. There are no narrow committing gorges on Trout Creek, so portaging is not a problem. Still, several steep bluffs forced us to pay attention when scouting and/or portaging, as one side of the river was often more favorable to foot travel than another.

The most complex portage came at the midway point, mile eight. Here, a gateway of granite looms over the creek, forcing it over falls up to 15 feet in height. Just below, the river sieves into multiple channels, some of which appeared potentially runnable with higher water. We spent little time scouting, and commenced on a portage-paddle-portage-paddle-portage route that crossed from river left to river right amid the chaos. This was the longest of our five portages on the run. Two of those came early to save time, and one was a tree. Only two portages were due to difficult rapids. There is strong potential that Trout Creek can be paddled without any portages, a remarkable claim on a sixteen mile run of class IV and V whitewater.

At mile nine, I was reminded of something Johnnie Kern once said to me about the relentless Middle Kings. “At three fourths through the run, that’s where people start to melt down a little.” Lisa and I were ready for the paddle-out. We had our fill of whitewater. The afternoon was waning. But Trout Creek was not done with us. Several big rapids stacked into that ninth mile, a section that was only 90 feet per mile according to my map. It felt steeper.

For the next few miles, finally, it was cruise time. Yet even through this easy section, class IV rapids appeared at least once a mile. Just below one of these bouldery drops, Lisa stated, “I wonder if my boat has a hole in it?” Sure enough, the eleven-year-old Prijon had taken one shot too many, suffering a crack on an edge beneath the seat. With just a few miles left, we discarded the idea of a field patch, and simply stopped to dump water every half-mile. 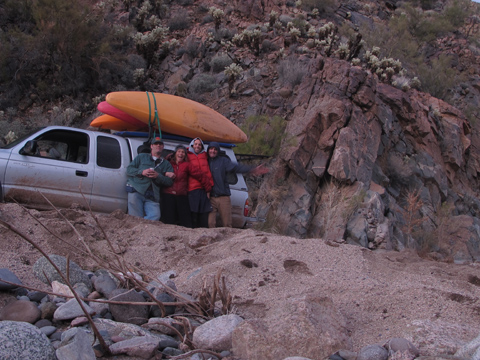 The boat leak didn’t prevent Lisa from running any rapids. Some of the best drops of the day came in mile 14, where a short gorge produces a quarter-mile of high gradient. Whitewater was a blur to us now, approached on auto pilot while looking ahead to each bend in the canyon that we hoped was the last. With forty minutes of daylight left, a broken dam forced us into a shallow channel that dribbled into sandy flats. I was scanning for depth when my eye caught two figures and a truck ahead. “Yeeeaaahhhh!” Govi and Phillips, after only having been shown a bend in the river on a large scale map, were precisely at the take-out. The team was reunited, and the last major un-run Arizona river—to my mind at least, and for this generation—was no longer a mystery.