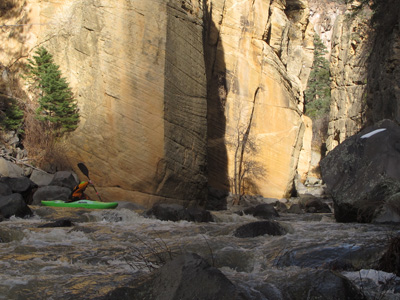 I snapped a picture as Scott disappeared around the corner. And then I heard the sound: plastic on rock. I looked up at Pete. He had that athletic ready-to-move stance, and he was looking expectantly over the edge, toward the hole. Time to go check out the action.

Although we had shared leads all trip, Scott was the primary probe. Just upstream, he had run both Supai gorges while Pete Traylor and I watched from the cliffs above. Scott was feeling it. Naturally, he was first to charge this hole, a relatively simple looking affair but closed-in between sensual smooth red rock shelves.

When I got to the edge, Scott was side-surfing, getting thrashed violently. An eddy fed the river left side of the hole, an uphill boil blocked the right. There was no escape in a boat. After several seconds he was out of his boat, and I jumped into a bedrock hollow to brace for a rope throw. He surfaced in the froth and I threw, landing the bag short of his head by about two feet. Fortunately, I felt him grab the rope on the next cycle, and figured I’d be pulling him into the calm water at my feet any second. The rope tensioned. I pulled. No progress. He surfaced again. I pulled. Nothing, again. Seeing my stalemate tug-of-war, Pete asked if I needed help and I shouted, “YES!” Just then Scott went in for another round and I felt his body weight go deep. “Ah hah,” I thought, “now I’ve got him.” Like landing a big fish, I gave a strong pull and up came Scott, sputtering into the eddy. Pete took off running downstream after the boat, the paddle, and, was that a sprayskirt floating past? In twenty-two years of kayaking, I’d never seen a sprayskirt become disengaged from a body during a hole ride. You learn something new every run I guess, at least on Woods Canyon. 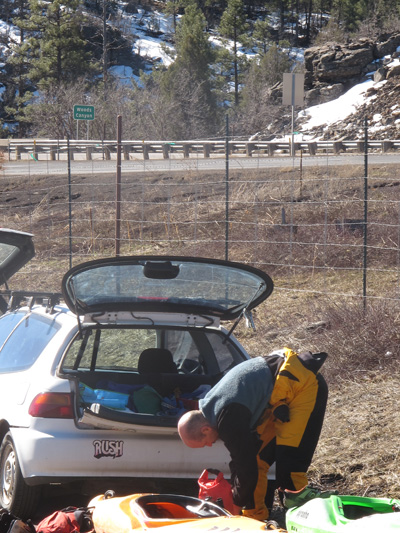 It had been fifteen years since Eric Brown and I first paddled into Woods. Jim McComb had it on his radar then, and he threatened to come up from the Valley to run it if nobody else did first. That was all the motivation Eric needed. Nine months after his traumatic rescue attempt of the late Dugald Bremner, Eric was ready to get back in his kayak. We said a blessing to Dugald, and pushed into the canyon. It was a somewhat surreal trip. The only things I remember are what my notes say, because after making great efforts to photograph the entire canyon, I reached the take-out to find no film loaded in my camera. Film! Remember that? I guess it was time to go back to Woods.

I was a little surprised to find how popular the run had become. Unlike other seldom seen class V Arizona rivers that I describe in Paddling Arizona, Woods has been paddled several times over the years. Maybe it’s the creek’s obvious put-in, directly beneath Interstate 17. Maybe the name—Woods—just has a ring about it. Maybe it is truly a top-notch adventure with quality whitewater, and word is getting around. Turns out, all three are true. 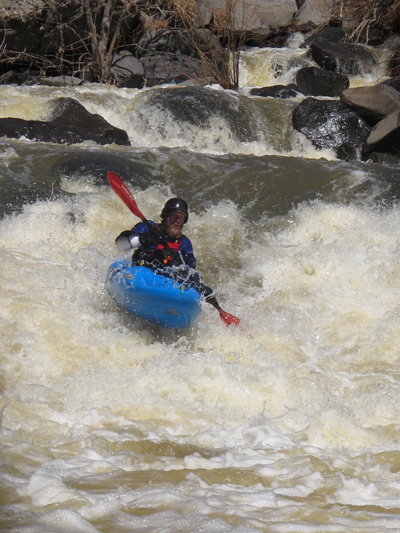 The first mile is a not-so-steep warm-up featuring kind grass hummocks instead of rocks. Even the first tea-cup basalt falls, featuring a worrisome rooster-tail that had caused me to portage in the past, turned out to be soft as a feather bed. There was mank too, some of which Scott Dent chunked through, but the slides and falls and S-turns of the first few miles are what remain in your brain, and put a smile on your face. 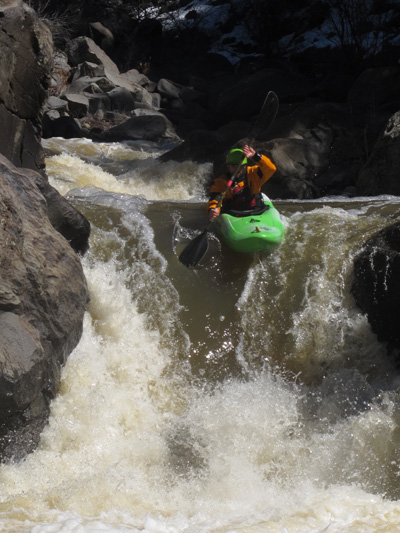 Open skies and clean rapids are traded swiftly at mile three, exchanged for a big falls and foreboding gorge. After carefully rope-lowering our boats through the snow, I stood and shook my head in amazement at the monster drop that Harlan Taney and Roy Lippman ran on the second descent. They dubbed the next quarter-mile below the falls “Adrenaline Hangover.” It drops 500-feet-per-mile. Pete and I scouted our lines on dry land through here, while Scott picked through the section, running occasional drops while we paused our portage progress to watch, and be ready with a rope. 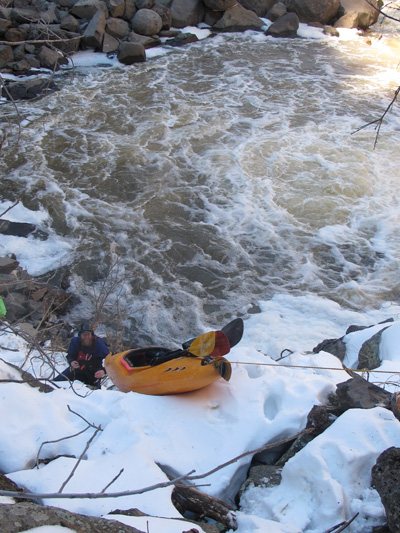 The afternoon was a blur of narrow sandstone gorges, usually with just enough rocks and eddies to carefully negotiate our way through. The one exception was a spot Eric Brown and I called “Mandatory Penalty,” because the only passage was a blind chute that brought one’s elbow into contact with the cliff wall. From the top, it was just as I remembered, and after watching Scott vanish below the horizon, and then re-emerge far below, Pete and I gulped and took our turns. Fortunately, my elbow was spared this time.

The first campsite for hours appeared amid growing darkness. It came just in time to spare us any night paddling, or a horrible rocky bivouac. It didn’t, however, come quite soon enough to allow a good visual of the winter bare poison ivy that grew throughout. My forearms are still scarred. 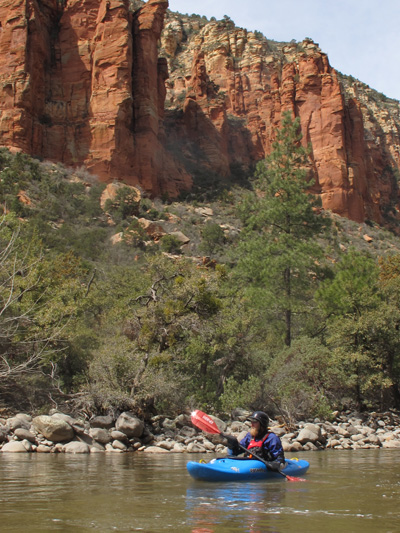 The water was lower by morning, and after getting through the Supai gorges, and Scott’s swim, we bounced out on a meager 200 cfs. My attitude was adjusted for true low water brutality, so whenever a rapid came with a clean line, it was like a bonus. So despite the many rock-bashing gravel bars, I enjoyed the paddle out; the red rocks, the sycamore trees, the exotic feel of central Arizona paddling. I’m not sure if I’ll get to paddle the entirety of Woods Canyon again. It is a physically demanding endeavor, and I’m in my forties. But now I remember the place, and I’ve got the pictures to prove it.