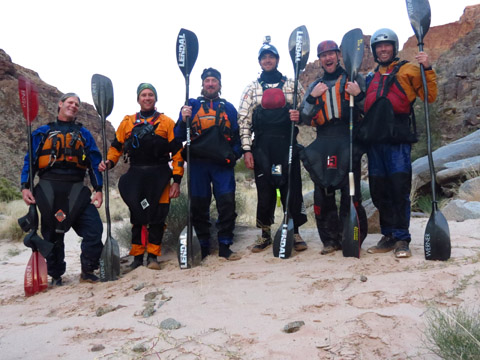 This BLOB brought to you by Funhog Press. Thank you Kokatat, and Werner.

The Lees Ferry ramp was vacant when we arrived, but a buzz of excitement soon materialized. Scientists plied the water, measuring the flow. A cadre of interested parties—from ex-river guide lawyers to USGS bosses to the under secretary of the interior—mingled at the edge of the rising tide. All were curious as to what we had in mind, our boats and gear arranged for the park ranger in perfect inspection-ready rows. 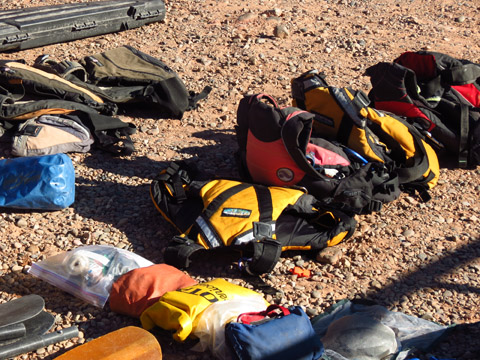 In the morning, Dave Dill’s cairn won the prize for estimating the final height of the river at 37,000 cfs. It was a good omen for Dave, who would finish the trip without a single Eskimo roll in his Pyrannha speeder. 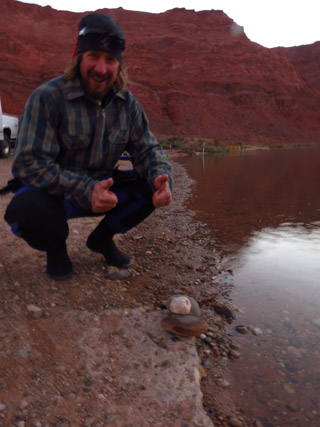 Justin and I were last to leave shore, at 7:35 a.m. It was 21 miles before we got another close look at the rest of the team. That was at our first stop. After barely a handful of food and a gulp of water, it was time to go again. Justin and I were last to shove off, and I gave him the nod to go ahead in his slower kayak as I fiddled with my hatch cover. That was nearly a big mistake. In haste, I pushed away from the beach and heard a pop. Half of my two-piece paddle was stuck in the sand, leaving me with an ineffective single blade. I was floating at the brink of a speeding current, the beach eddy surging in rhythm beneath me. I tried paddling with the half blade. Total spaziness. I reached into the water, and luckily gained purchase in wet sand. Seconds later I was standing on the beach, holding the kayak with one hand as I retrieved the stuck paddle with the other. My pogee must have depressed the take-apart button on the paddle as I shoved off. I got back in and stroked steadily to catch the group. Dave waited for me above Indian Dick Rapid. As I rounded the corner and gave the all-okay signal, he turned to disappear into frothing waves. Time to go. 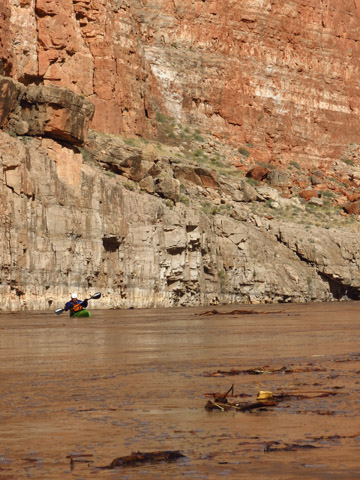 At Nankoweap, I strayed ahead of Pat and Justin, the two short boat paddlers. Awe-inspiring cliffs towered to my left. The conifers of the North Rim opened to my right. Possessed by the wild world, I let out a howl, and paddled straight into the big rollers of Nankoweap Rapid. An unpredictable surge built off my bow. There was nothing to do now except brace for the crash, and hang on as my 14-foot kayak  launched into a towering back-ender. Buzzing from the power of the world around me, I wheeled into a river camp for a quick visit, the second trip we’d seen in 52 miles. Sitting at the oars were my friends Jason Hughes and Reed Allen. They had just pulled in for day three’s camp. We kayaks, on the other hand, still had twenty miles to go before sunset. 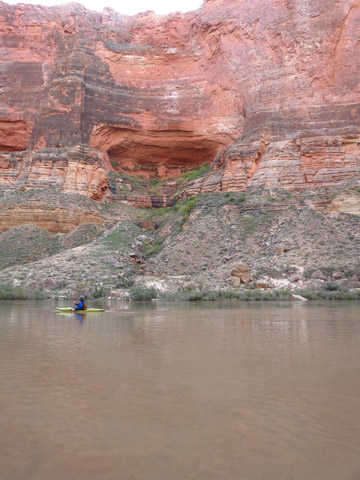 The Little Colorado River glowed with an azure blue sheen like I’d never seen. It was a fitting place to encounter Roy Lippman, wide-eyed from a few days of solo boating, and ready to join the safety of our group for the rapids to come. At 4:50, Cardenas Camp beckoned. Seventy miles were behind us. This might just work. 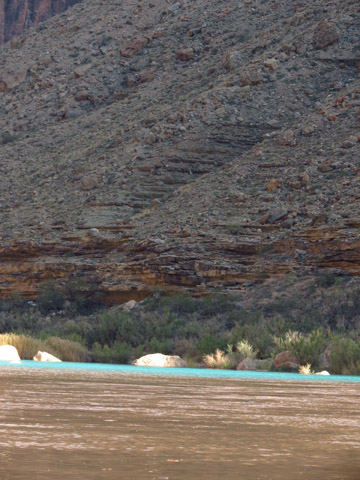 Despite rising well before dawn crept into the eastern sky, I was scrambling to get ready for our 7:20 departure. Following some debate over a scout at Hance, we reasoned that the best view would come from the middle of the river, in our boats. Harlan led. I followed. The first of the biggies, Hance proved huge, but open. Our confidence grew. 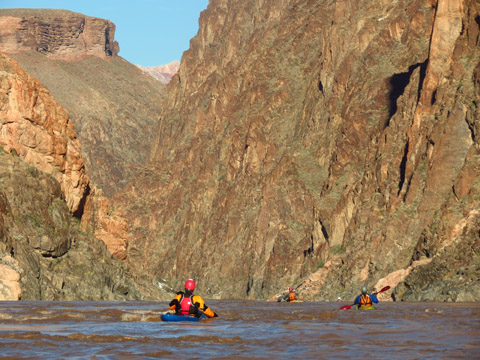 Phantom Ranch provided a re-fill for our water jugs, and a downright lazy 15 minute break before launching into  perhaps the fastest mile in Grand Canyon. Hikers stood on the trail above, gazing down at six kayaks riding the back of a restless river, zooming down nature’s highway amidst one of the most astounding landscapes on the planet. It was hard not to feel just a little rad, and damn lucky. 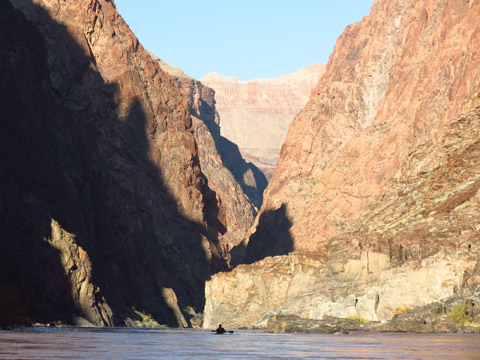 Everyone surely had a slightly different motivation for joining a trip like this, but one big draw for all of us was to see the familiar rapids with a new face, with twice the water to which we are accustomed. I repeatedly reflected on the fact that before the dam, this river typically peaked at over 75,000 cfs every spring, and even during the well watered years of the early 1980s, it often ran over 40,000 cfs. In that context, our 37,000 cfs could hardly be called high water, but to us boatman of the 90s and 2000s, THIS was high. It certainly felt high. 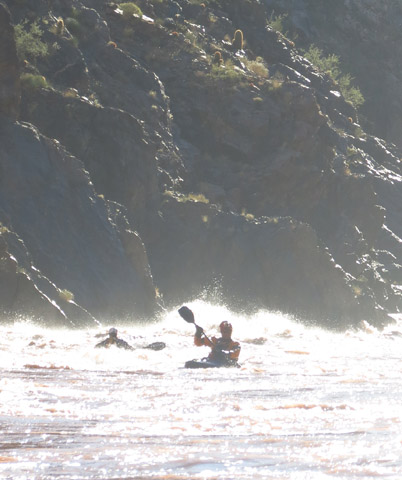 Horn Creek was big down the right, as usual, but wide open down the left. Granite, where our friend Susan Hamilton snapped photos from the bushes, undetected by any of us (we were somewhat occupied), was not too dissimilar from normal. Hermit, the biggest wave train in the Canyon, held much speculation. I figured it would wash-out into big simple rollers. It did not. A mess of huge erratic breaking waves offered the big line. Lippman took the bait, displaying a spectacular end over end run that only the raft trip on shore got to witness. The rest of us were dodging a lateral on the left, making a dash for smoother water. Crystal had me paddling with real purpose, trying to avoid a series of absolutely massive features on the left. 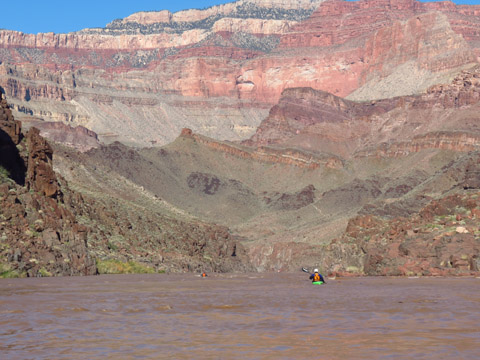 Following a quick lunch break in the sun at Bass Camp, I took the lead for the first time in the trip, immersing with the Canyon as if it were just the two of us. But Harlan, with his boat and his body, could hardly paddle slow enough to stay behind my pace. We strung out in a long line, keeping the next guy in sight but paddling mostly solo into the flat water of Conquistador Aisle. Late in the day as weariness began its insidious machinations on our bodies, Bedrock Rapid snapped us awake. Phillips led without apparent struggle, perhaps luring the rest of us into unwarranted nonchalance. The water seemed jet-propelled, and followed no logic. Dill was launched into a swirling turbulent eddy on the right, and I followed. Taney flipped in overhead boils mid-rapid. Salamon vanished from sight for a disconcerting three-seconds as he circled the drain of a whirlpool beneath the surface of the waves.

As we drifted past Deer Creek Falls late in the afternoon, I began to doubt our chances of making the Muav Gorge by nightfall. My trepidations were unfounded, however. Colors started to fill the sky just as we passed Kanab Creek, and glided swiftly through the Canyon’s limestone narrows. With ten minutes of daylight to spare, we pulled into camp across from Matkatamiba Canyon. Sensation crept back into my toes. 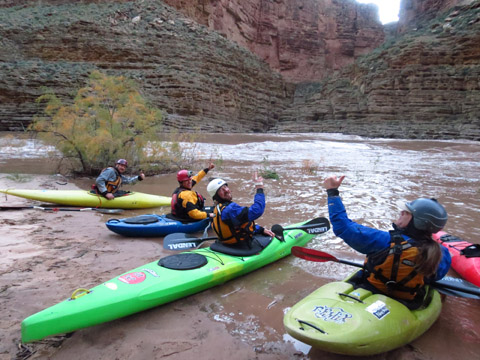 One more day, one more marathon. Okay, three more marathons. Our first stop was National Canyon, next was Lava Falls. The biggest rapid in Grand Canyon was in fact washed-out to a degree, but the speed of the water and size of the features made it as intimidating as ever. We scouted with scrutiny, eye-balling a line down the center-left. Looking back, I saw Justin, appearing insignificant, bobbing through spitting explosions of sun spackled water, absolutely magnificent. Our hoots and hollers reached one another only at a distance. There were no shots of tequilla or celebratory high-fives following this Lava run. We had miles to make, and make we did, rolling out 9 miles an hour to our next snack break. 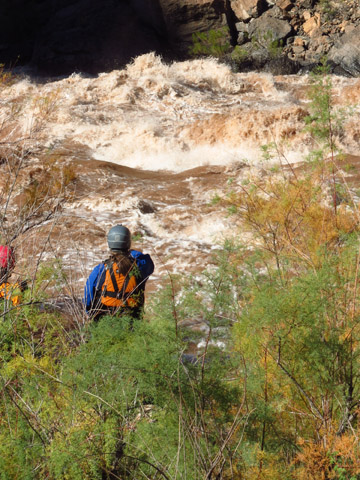 The first floating raft trip we encountered was led by our buddy Brady Black. In a post-Lava haze, we visited as we drifted momentarily, then weaved through several rafts before again having the river to ourselves. It was apparent now, three days to Diamond Creek was realistic, at 37,000 cfs. By the time I bedded down at home, my feet would be swollen and sore from constant numbness, and my body would reeling with an all-night fever from the relentless activity. But this will pass. The high of good friends, good water, and the satisfaction of testing oneself in harmony with nature’s power, will remain; so that when I need to return in my mind, to the roiling Colorado with the sun throwing gold across the lower Canyon, I’m there. 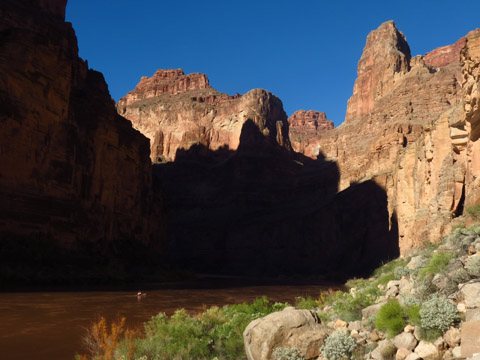